Turkey has invaded Syria, and, fearing Russia expansionism, the West intervenes. Sound familiar? That was the situation in 1839. While researching a current work in progress I stumbled on The London Convention of 1840 and the obvious comparison to events of this month jumped out. History repeats. 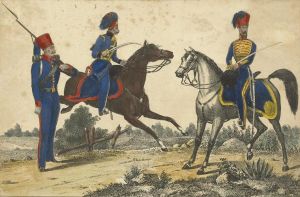 The diplomatic background of the 1839-40 events is a rabbit warren of greed, expansionism, colonial ambition, jealously guarded trade routes, and rivalry—the usual evils—enough to keep an army of historians busy for decades, and it has. For most of the nineteenth century, the European powers found it convenient to have a weak Ottoman empire (one they could influence) as a buffer between Russia and the Mediterranean. In 1840 oil had not yet emerged as a driving force and Iran remained an independent force to the east, but many of the players we know today were involved.

A brief summary of events that lead up to the 1840 conference begins with Napoleon invading Egypt, a weak link in the disintegrating Ottoman Empire, in 1798. Though Britain, under Horatio Nelson, defeated the French fleet in the Battle of the Nile, France took land control, but only held it for a few years. Ultimately the Sultan sent his crack Albanian troops under Muhammad Ali Pasha who reclaimed Egypt for the empire.

Muhammad, no fool, knew the empire was losing its grip. He set himself up as “khedive,” or viceroy with Egypt nominally a province of the Ottoman Empire, and proceeded to expand his own power. By 1839 he controlled all of modern Egypt and Sudan, while his son Ibrahim Pasha controlled Syria, which included what is now Lebanon, and Palestine (as well as what is now Israel), on Muhammad’s behalf. He also made inroads in Arabia.

Though he overthrew French control, Muhammad admired French culture and science. The French heavily influenced his court in areas such as medicine and engineering. Throughout the 1820s and 30s France tended to have the edge in obtaining Egyptian support in areas such as trade, a relationship that would culminate in the building of the Suez Canal.

Such was the situation in 1839 when Ottoman forces loyal to the Sultan Abdülmecid I attempted to retake Syria from Ibrahim Pasha. It was no contest; Ibrahim easily defeated their forces at the Battle of Nezib. The Ottoman fleet, sensing the imminent collapse of the empire, sailed to Alexandria and in July 1839 surrendered to Muhammad Ali. Egypt stood on the brink of taking control of the entire empire. If a weak Ottoman empire served European interests, a strong Egyptian one did not. Intervention became inevitable.

The Ottomans prepared to cede Syria to Muhammad, but the British and Austrian Ambassadors convinced them to stand firm. The Russian Navy sailed into the Bosporus; a combined Austrian/British force (under British command) prepared to move.

Independent attempts by France to negotiate a compromise between Egypt and the empire came to light. At that point, Lord Palmerston hastily called together representatives of Austria, Russia, and Prussia who hammered out a treaty. The Ottoman Empire was ostensibly a signatory but in point of fact had no choice.  They signed the Convention for the Pacification of the Levant on 15 July 1840 and agreed to a four party effort to protect Ottoman interests. They gave Muhammad Ali ten days to agree to some loss of territory and threatened to remove Egypt’s control over all of their territories in Syria, Palestine, and Crete if they did not comply in twenty days. 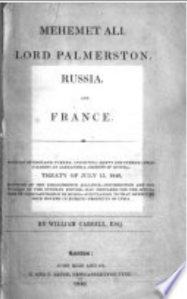 Believing he had French support, Muhammad refused. Aware the British fleet now stood off Syria, France backed down rather than going to war with England even though they were furious they were not notified about the London conference. Muhammad was forced to sign in November, and his domain reduced to Egypt and Nubia, modern Sudan.

“Pacification” obviously failed in the long run. Various wars, rebellions, and conflicts have continued to this day. The long fingers of various powers have attempted to determine the future of the entire middle east repeatedly, notably the Congress of Berlin 1878 and the Treaty of Versailles, 1919. As I write the United Nations meets about the humanitarian crisis, and the American Secretary of State is in Turkey to negotiate a de-escalation. Again.

Goodreads lists 33 novels set in the Ottoman Empire. I was surprised— and delighted —to find Dangerous Weakness among them! Here are a few:

Caroline Warfield who loves history and all things historical, continues to write historical romance and family sagas covering the late Georgian, Regency, and Victorian periods. Her novel, Christmas Hope is a different turn, a story in four parts each ending on Christmas 1916, 17, 18, 19. It takes place in and around Amiens and northern France. Some wars must be fought, some loves must live on hope alone, and some stories must be told. This is one of them.

← Civil War Spies and the Rise of the Pinkerton Agency
Chariots of Fire: the Rest of the Story →

One thought on “Doomed to Repeat”