Chariots of Fire: the Rest of the Story

October 25, 2019 by Linda Bennett Pennell
Bring me my Bow of burning gold:
Bring me my arrows of desire:
Bring me my Spear: O clouds unfold!
Bring me my Chariot of fire!
Jerusalem, William Blake

Most readers will recognize these stanzas if for no other reason than they have seen the 1981 Academy Award winning film Chariots of Fire. Blake based them upon the Biblical story of the Prophet Elijah, who was taken up to heaven in a fiery chariot. The movie told the story of British runner Eric Liddell, a.k.a. The Flying Scotsman, and his participation in the 1924 Paris Olympics where he won gold in the 400 meter and bronze in the 200 meter. He set a world record for the 400. In addition to his record setting win, what made his participation remarkable was the stand he took against racing on a Sunday. Liddell was a devout Christian who took very seriously the Commandment to remember the Sabbath and keep it holy. His best event was the 100 meter dash, but the heats were to be held on a Sunday. He withdrew rather than compromise a tenet of his faith. After the ’24 Olympics, he melted back into the relative obscurity from which he had arisen. But for war and imprisonment, that might have been the end of the story. 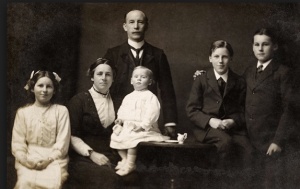 Eric, 2nd from right, with his parents and siblings.

Although a Scot, Eric Liddell was born on January 16, 1902 in Tientsin, China to missionary parents. He, like so many children of expatriates, was sent “home” for school at the age of six. He and his older brother attended Eltham College, a boarding school in London for the sons of missionaries. At Eltham, he distinguished himself as an outstanding athlete in cricket, rugby, and track. Despite his exceptional ability on the playing fields, he was also noted for his complete lack of vanity. After completing his secondary education, he enrolled at the University of Edinburgh where he once again demonstrated his athletic prowess. His successes at university track meets 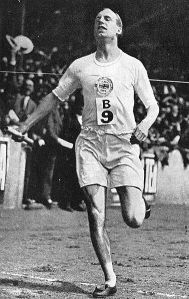 brought the attention of the press, which began to tout his Olympic potential. He interrupted his education briefly to compete in the Paris Olympics after which he returned to Edinburgh where he graduated with a Bachelor of Science in 1924.

In 1925, Eric returned to Tientsin as a missionary. On furlough in 1932, he was ordained a minister and upon returning to China married the daughter of Canadian missionaries, Florence MacKenzie. They had three daughters who all now reside in Canada, but Eric did not live to see his youngest daughter.

Anyone familiar with Far East history is aware of the growing dangers to anyone living in China during the 1930’s. Tensions between China and Japan and the instability of the Chinese government created a climate of uncertainty that ultimately led to Japan’s invasion and occupation of mainland China during the short-lived Sino-Japanese War. The Japanese were brutal in their efforts to subdue the country, as the period known as the Rape of Nanking illustrates. In December 1937, the Japanese army invaded Nanking, then China’s capital, with orders to destroy the city. In pursuit of this goal, they slaughtered 300,000 of the 600,000 civilians and soldiers inhabiting city. Reports for countless rapes, babies being cut from the wombs of pregnant women, and males being forced to rape their own family members were the fates of those who were not murdered immediately following the occupation. The carnage of that six weeks period represents the single greatest atrocity of World War II.

In 1937, Eric was sent to join his brother, also a missionary, in Siaochang where they were teachers in a boys school. He crossed Japanese lines in order to get there. By 1941, conditions had so deteriorated the British government urged its nationals to leave China. Eric sent Florence, then pregnant with their third child, and their two daughters home to Canada. He, however, stayed on to minister to the people of the province. He provided emotional support and medical care to the desperate population. There are stories of his transporting the sick and wounded to the village hospital on his bicycle. He gave whatever assistance was needed.

In 1943, the Japanese rounded up all remaining foreign nationals and placed them in concentration camps. Eric was interned at Weihsien Internment Camp.  The internees initially tried to maintain as normal a life as possible. They organized a band that gave concerts, grew what food they could, and played sports, but as the war dragged on, food shortages and camp conditions in general grew worse. During his time there, Eric was regarded as a leader and an inspiration to others. His faith, kindness, and principles did not change under even the great strain of life behind barbed wire.

At some point, his health began to fail. He feared he was having a nervous breakdown due to overwork as he stated in his last letter to his wife. In reality, he was suffering the effects of a brain tumor. Eric Liddell died on February 21, 1945, five months before the camp was liberated. His loss was sorely felt by all. His fellow internee, Langdon Gilkey, later wrote, “The entire camp, especially its youth, was stunned for days, so great was the vacuum that Eric’s death had left.”

Eric Liddell – Missionary and Sprinter for the Lord

One thought on “Chariots of Fire: the Rest of the Story”