With summer fast approaching for those of us who live in the United States, dinner table discussions in a lot of homes have been centering around summer vacations. If a road trip holds any appeal, might I suggest following a portion of the Oregon trail, which was traversed thousands of times by energetic young families who wanted a better future for themselves.

A good place to begin a present day journey is at Ash Hollow State Historical Park in Nebraska. Situated at mile 504 along the trail, it served as the entrance to the North Platte River valley, and was a favored camping area by Native Americans and later, by wagon trains. Wagon ruts still visible in the area attest to how highly travelled this area was during the latter half of the 19thcentury. Nine miles of hiking trails are available in the park. One of the most popular leads to Windlass Hill, where the grooves carved by numerous wagons are easily viewed. A pageant is held each June and includes readings from the diaries of the hardy pioneers who trekked westward.

Every portion of the trail is enlightening, but the landscape really becomes interesting at about mile 550 in western Nebraska. The first major natural outcropping that greeted travelers was Courthouse Rock, a guiding landmark on the trail. Carved over thousands of years from clay and sandstone, Courthouse Rock was so named because of its similarity to impressive courthouses back east.

Rising three hundred feet into the air, the rock was visible from forty miles away. Considering most wagon trains only were able to travel an average of ten to fifteen miles a day, folks stared at the outcropping for days before the actually arrived.

Here’s a passage from Volume Four of Covered Wagon Women, 1852

From the diary of Mariett Foster Cummings

June 9th—Started early and passed a grave just finished, an old man from Illinois. Came to a high sand ridge white as snow. Passed Courthouse Rock, square in front, with a smaller one near by looking like a sentinel post. The upper part of Chimney Rock is becoming plainly visible. An antelope came almost into our noon camp. They shot at it but it went bounding off to the hills unharmed. Camped opposite Chimney Rock, said to be 700 feet above the level of the Platte. Made 28 miles.

From the diary of Eliza Ann McCauley

Saturday, June 12th—At noon we were nearly opposite the “Chimney Rocks” also on the south side of the River. Camped near the River. Buffalo chips scarce and no other fuel to be had.

Twelve miles to the west of Courthouse Rock stands Chimney Rock, a picturesque rock formation rising 325 feet above the prairie and shaped like a chimney. In addition to its beauty, Chimney Rock also served as the dividing line between the prairies just traversed and the more challenging steep and rugged terrain to come as the wagons climbed into the Rocky Mountains.

Farther along the trail, at mile 815, travelers today come to Independence Rock, in present day Wyoming. This enormous rock stands 128 feet high, and is 1900 feet long and 700 feet in width. It was named Independence Rock following a fur traders celebration of the Fourth of July in 1830. It is sometimes referred to as the “Great Register of the Desert” since more than 5000 travelers stopped by to carve their names in the boulder. Wagon trains used this landmark as a measuring stick. If they reached Independence Rock by July 4, they were on track to get to Oregon before winter. 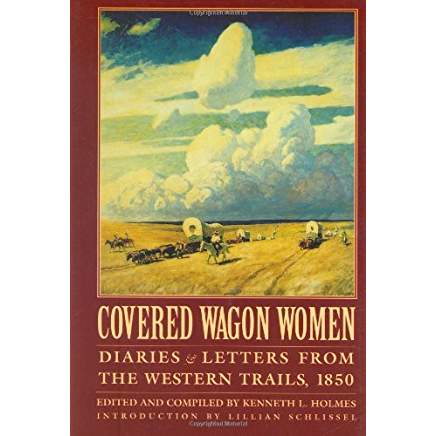 “The diaries and letters…throb with excitement, pain and mind-boggling determination.”—Kliatt (bi-monthly literary magazine)

Becky Lower has traversed some of the Oregon and Santa Fe Trails during her travels throughout the United States, and knows she’d have been filling her own diary had she lived 150 years ago. Now, she writes about it, in her Cotillion Ball series and while working on a new manuscript about a wagon train of mail-order brides.

← History of American Crime: Getting Organized
The Prince of Fraud →

8 thoughts on “The Oregon Trail”