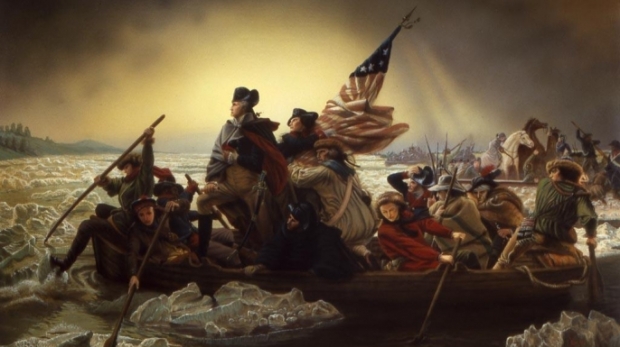 At this time of the year, especially in the Northern United States, uppermost in our minds are warm fires, hot chocolate, and the comfort of family as we celebrate Thanksgiving and Christmas. Can you imagine the hardship then, of the Continental Army at Christmas, 1776? Several crushing defeats at the hands of the mighty British and German troops in the fall of 1776 had the volunteer army thinking of the same things we now associate with this time of year. Many who had volunteered returned to their homes, fearing the war was a lost cause. 44-year-old General George Washington needed a victory in order to turn the tide.

What he came up with was a masterful plan. Knowing the 1,400 Hessian troops ensconced in the garrison at Trenton NJ would be celebrating Christmas long into the night, he planned for his troops to invade their stronghold the morning of December 26. In order to do so, he had to move his troops across the icy, frozen, Delaware River on Christmas night. Washington’s hope was for a quick, decisive victory to boost the sagging morale of his troops and to encourage new volunteers and those who had defected to return to the Army. Three separate crossings were planned, under the guidance of Col. Cadwalader, Gen. Ewing and Gen. Washington. Due to the icy conditions of the river, however, only one of these pronged attacks actually succeeded in the crossing. Washington’s force of 2,400 spent Christmas night crossing the river, disembarking ten miles north of Trenton, hiking to the garrison from there and attacking at dawn.

The Hessian forces had been tipped off by a spy within Washington’s camp, but his warning was dismissed in favor of celebrating the holiday. Meanwhile, experienced watermen aided the troops and the artillery in getting across the river during the night. Howling winds and an icy drizzle made the passage extremely perilous. With the temperature hovering around the freezing mark, the weather and the men who were ill-clad and tired caused major delays to the planned attack and Washington began to have second thoughts about the invasion. Washington later wrote, when remembering this fateful moment, “…As I was certain there was no making a retreat without being discovered, and harassed on repassing the River, I determined to push on at all Events.”

At 8 AM the morning of December 26, the groggy Hessians were surprised and quickly defeated. By 9:30 the garrison was surrounded and 1,400 Hessians were captured. While this was more a moral victory than anything else, Washington’s bold crossing of the Delaware served as a much-needed boost for the entire Continental Army.

The famous painting of Washington Crossing The Delaware was not painted by an American, but rather by a German painter. While there are some historical inaccuracies with the painting, it remains one of the most iconic in America’s rich history.

Becky Lower writes mostly American and Regency romances. In addition to History Imagined, she has a weekly blog at http://beckylowerauthor.blogspot.com. November and December’s blog entries feature Christmas stories from various authors and will certainly provide you with some timely reading material.

Click here to find out more about Becky’s books: http://www.beckylowerauthor.com

← History of the South’s Favorite Pie
The Anti-Opium Crusader →