In an era riddled with scandals both personal and public, the one involving a US Congressman stands out for the sheer boldness of one of its participants. Long before the present #MeToo movement, a woman who had been wronged, lied to, and manipulated decided she had had enough. Just because women had few rights, could not vote or serve on juries, did not hold title to their own property, did not have a legal right to the custody of their own children, and were basically considered their husbands’ chattel, didn’t mean Madeline Pollard would be prevented from taking action against her false lover. It may have helped her in the end that she was his mistress instead of his wife.

Prior to the mid-twentieth century, middle and upper class men took it as their right to do whatever and with whomever they pleased where women were concerned. For those men, women fell into two categories: the ones they married and the ones they sewed wild oats with. Society generally supported them in this view. The good women, their wives and those deemed marriage material, were the upholders of the moral code, the keepers of hearth and home, the mothers of their children, and their husbands’ uncomplaining helpmeets. Wives were expected to be ignorant of the seamier things in life or at least pretend to be. If a man had a mistress, his wife was not to complain or even acknowledge the existence of the affair. During the Gilded Age, young children of the poor were sent to work in factories, as laborers, and as servants. With the age of consent being between 10 and 12 years, opportunities for abuse existed with the young and some men took advantage. 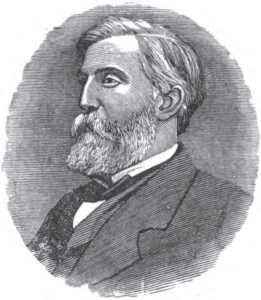 William Campbell Preston Breckinridge was a gentleman who enjoyed the privileges of power, fame, and position. He came from a family with a long history of political achievement. His grandfather had been a US attorney general, his cousin had served as vice president, and several relatives had served as senators, congressmen, and governors. By 1893, Breckinridge was the five-term congressman representing Kentucky with ambitions that rose as far as the White House. The married father of three was destined for greatness. By 1894, all of that would come under threat because of a chance encounter 10 years earlier.

In April 1884, Breckinridge met Madeline Pollard while traveling from Cincinnati, Ohio to his home in Lexington, Kentucky where he also had his law practice. He was 47; Madeline was either 17 or 21 depending on the source consulted. She was a student at Wesleyan College, but was traveling home to Franklin to the bedside of an ill sister. She must have been flattered when the congressman introduced himself and struck up a conversation. Considering what happened subsequent to that first meeting, she might also have been more than a little attracted to him, as well. Three months after the train trip, she wrote to him asking advice regarding a debt incurred for her tuition.

Madeline came from a respectable, but impoverished family. Her father died when she was ten leaving her mother with little money and a houseful of children. The financial situation was so dire that the children were parceled out to relatives with Madeline rotating through a succession of aunts’ homes. She yearned for an education that might secure a better future for herself. She approached a neighbor, James Rhodes, asking that he pay her tuition with a promise to marry him upon graduation. On August 3, Breckinridge sped to Wesleyan to offer his advice. During the evening, he requested a private interview and they drove away from campus in an enclosed carriage. He convinced her to meet him in Lexington two days later where he seduced her.

She transferred to Sayre Institute in Lexington so that they could meet as often as his schedule allowed. Breckinridge paid her tuition. For three years they carried on a torrid affair during which she became pregnant twice. Each time at his insistence she gave birth at House of Mercy, a home for unwed mothers, and then placed the babies in an orphanage where they soon died. She would later say that she had given up her babies because the congressman was afraid that they would be traced back to him and she loved him too much to allow any taint on his reputation.

Breckinridge moved Madeline to Washington, DC in September 1887 and secured a position for her in the Department of Agriculture. The affair continued apace and Madeline fell pregnant for a third time, but this one was to be different because the congressman had become a widower in July 1892. He proposed marriage to Madeline and some sources report that the couple began picking out names for the new arrival. They set a May 31, 1893 wedding date then postponed it until December so that no one would know that Breckinridge was the baby’s father. All the while Madeline truly believed the marriage would eventually happen, so it must have come as a tremendous shock when Breckinridge revealed he had married his cousin in a secret ceremony in April. His reason for secrecy was to give the new stepmother time to form attachments to his three children and they to her. Madeline miscarried in May. One can only wonder if the shock and stress contributed to the baby’s loss. At this point, it had to have been abundantly clear that the congressman had never intended to marry Madeline at all and she had had enough. She filed suit for breach of promise, asking for $50,000 (about $500,000 today).

The trial commenced March 8, 1894. The nation’s attention was riveted for the duration of the 28-day legal circus. As one might expect, there were accusations and recriminations on both sides. She argued that he had seduced her while she was still very young, had forced her to give up her babies, had promised to marry her then married another woman while she had done everything within her power to please and protect him and his reputation. When she spoke of the second baby’s death, she broke down on the stand. He called her a harlot and gold digger, claiming that she pursued him and that he had no knowledge of the first two babies. Breckinridge’s attitude, arguments, and public interviews made it clear he saw nothing wrong in his conduct, that a man had needs and was justified in satisfying them wherever he could, that certain women were fair game. Madeline made the better witness for the jury was only out for around an hour before returning a verdict in favor of the plaintiff, awarding her $15,000. Breckinridge appealed the decision twice, but lost both times.

Until recently, historians have largely ignored the trial that attracted so much national attention at the time, but its importance is now being reconsidered. The case proved a turning point in societal attitudes toward powerful men and their freedom to do as they pleased in sexual matters and where women were concerned. Through her suit, Madeline demanded that men’s and women’s conduct be judged on an equal basis. She was helped in her quest by other women. It is said the trial galvanized the suffrage movement in Kentucky. Protest meetings were organized and well attended. Resolutions were adopted calling for the congressman’s defeat. Businesses supporting Breckinridge were boycotted. Parents sent letters to newspapers warning the congressmen’s supporters that they would not be allowed to date their daughters.

After the trial, Breckinridge would never win another election and would eventually beg forgiveness for his sin. Pollard gained the support of well-to-do women and traveled Europe as the companion of a wealthy woman. 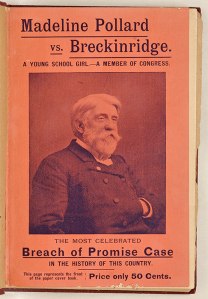 ← Revolutionary Men
Pirates and Petticoats of the Carolina Shores →

6 thoughts on “A Woman Scorned: a Gilded Age #MeToo Tale”