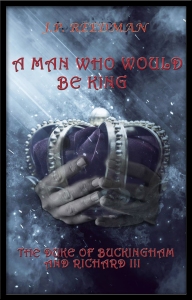 Henry Stafford, Duke of Buckingham, is a dark horse figure in the Wars of the Roses. Despite being of high lineage, Edward IV seemed to have little use for him. He came seemingly out of nowhere in 1483 and supported Richard of Gloucester’s kingship; in fact, one might say he was acting in the role of Kingmaker. A few months later, he betrayed Richard and raised a rebellion against him. The real reasons are not altogether clear. Tudor tradition has it that he had ‘repented’ and now supported Henry Tudor’s claim to the throne, but there was nothing Henry could have given him that Richard had not…and no guarantees. Was it the princes? Not likely as Stafford himself was the one who suggested they be housed in the Tower; he also appears in a striking amount of documents as their ‘killer’ (assuming they were killed.) The biographer of the Stafford family believes he was probably aiming for the Crown himself…

HS:  (appears, fanfare of trumpets) I have arrived. I beg you, call me Harry. Well, all of us Henrys are called Harry, are we not?

JPR:Your Grace, my Lord of Buckingham…Harry, please tell me about your birth

HS:   My birth took place in Wales, at Abergavenny Castle, on September 4, 1455. A most blessed day for my parents, Humphrey and Margaret; I was their eldest son, eventual heir to a great Dukedom.

JPR:  What influence did your family have on you?

HS: We were staunch Lancastrians, even if old Henry VI was mad as a march hare. I was named in the King’s honour .My sire died when I was just a young boy, I hardly knew him. He was gravely wounded in battle then, after being bedridden for several years, contracted a foul illness, which killed him. My mother remarried quite swiftly after. I became my grandfather Buckingham’s heir—he was of great influence on me as a child. When he was slain at the battle of Northampton, defending the King’s tent, I grew very bitter. Even more so, when I was made a ward of King Edward IV—I blamed him for grandfather’s demise.

JPR: What above all things would make you happy?

HS: Shall I be honest with you? A crown would make me ecstatic! And why should I not have it? I am descended from Thomas of Woodstock, son of Edward III on my father’s side, and on my mother’s side, I am a Beaufort, a descendant of John of Gaunt and his mistress Katherine Swynford. In my possession, I have a copy of the scroll legitimizing all the Beaufort children, but it is a ‘special’ version…written before a codicil was added that the Beauforts could never ascend the throne!

JPR: What do you fear the most?

HS:That I should not have all I desire…the things that I deem are my right. Wealth, lands, power! King Edward IV gave me no positions in government when I grew to be a man…you would think he did not trust me! I hoped that if I spoke  sweetly in the ear of his  younger brother, Gloucester, now King Richard III,  I would rise to the stars! And so I did, briefly. But it was not enough, it never seemed enough…

JPR: What is the trait you most deplore in yourself?

HS:  (laughing) Nothing! I am a most handsome, charming and witty fellow, worthy of the highest offices in England! Can you not see that?

JPR: What is the trait you most deplore in others?

HS: Weakness…but it can be useful. To me.

JPR: Which living person do you most admire?

HS: Haha, that should be obvious—me, of course! Seconded, perhaps, by my dear aunt, Margaret Beaufort. A most cunning woman, though perhaps somewhat too intelligent for a female…I feel she could outwit me; she is very bookish for a woman, and I have little time for books, save as decorations in my manors.

JPR: What is your greatest extravagance?

HS: Hounds, horses, castles, plate, lands, more lands. And clothes…they say I am something of a popinjay. You name it, I will have it!

JPR: What do you consider an overrated virtue?

HS: Loyalty. Why bother with such a changeable thing? If opportunities present themselves for one’s advancement, only a fool would not leap at them. Loyalty is for beasts like dogs…and even they might turn and bit you.

JPR: On what occasion would you tell a lie?

HS: On any occasion that would serve me well! Men respond well if you tell them what they want to hear…and fill their ears with flattery and blandishments!

JPR: What do you most dislike about your appearance?

HS:  Nothing! Look at me, a most comely and princely figure of a man…(hesitated slightly) well, maybe I do not like the fact I tend to gain a little girth so much…but I am not as fat as King Edward!

JPR: Which person living or dead do you most dislike?

HS: It must be King Edward. Fat Ned…now dead Ned. He never seemed to like me and it was because of him I had to marry one of the numerous Woodville daughters—Catherine. I was but ten at the time. I resented it very much, although I grew used to her in time.

JPR: What do you actually think of Richard of Gloucester?

HS: Richard is my cousin. We are quite close in age. I thought him someone who sees things without subtlety. If you say you agree with him, he will believe you do and that you will hold true to your word, no matter what. So I told him what he wanted to hear, what I thought he needed to know. Perhaps, I was a little economical with the truth sometimes…especially regarding Anthony Woodville…

JPR:  You have many holdings but where would you most like to live?

HS: My usual residence is Brecon castle in Wales. It is rather remote, however. Perhaps Thornbury or Penshurst Place, both nice little manors, the latter in Kent, not far from London.

JPR:  What is your most treasured possession?

HS: That scroll legitimizing the Beauforts. I gaze upon it frequently when my wife is not in the chamber..

JPR: What do you regard as the lowest depth of misery  in your entire life?

HS: When I realised what I thought was my destiny would never be fulfilled. When, after betraying Richard, the king I had made, I was likewise betrayed. My army of rebels vanished when a storm hit and the Severn flooded; so did Bishop Morton, who had sworn to support me!

JPR: What is the worst thing you ever did?

HS: You think I would tell you and damn myself? Let it just be said, perhaps I AM ‘the Most Untrue Creature Living’, which is what Richard called me on the day he issued my death warrant….Men whisper that ‘be the ‘vice of the Duke of Buckingham…’ Edward’s sons… ah, no, I will  not say, I must not say…Your time with me is up!

(Duke Harry Stafford rises and flounces from the room.)