Join me in a conversation with Mudarra González ibn Zaida, who was born to fulfill a purpose that affects every corner of tenth-century Spain. The novel that tells his story, Seven Noble Knights, debuts today! Please enjoy an excerpt after the interview.

We’re talking with Mudarra in May 990, after the events of the novel, in a red-and-white tent at a military encampment in an undisclosed location. The wooden chairs at the dining table are surprisingly comfortable, with silk pillows and footrests.

JKK: Happy book birthday, Mudarra. Please tell us a little about when and where you were born.

MGZ: I was born more than fifteen years ago in the harem at Madinat al-Zahra, the administrative palace complex close to Córdoba. My mother, Zaida, is Almanzor’s sister. She raised me without a father, and finding him is what brought me to this… northern country. They’ve welcomed me here and made me alcaide mayor, the highest military commander of Castile. But I think you’ve visited Madinat al-Zahra, so you’ve smelled the gardens, listened to the burbling fountains, and seen the grand striped archways in the Ambassadors Hall. 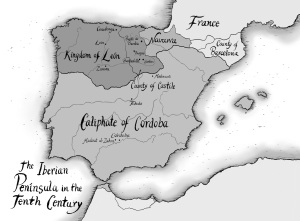 JKK: When I was at Madinat al-Zahra, I had to imagine all that because in 2016, it’s an archaeological site. I love Castile, but I can understand why it might be hard to go there from Andalusia in your time. Can you tell us why you left it all behind?

MGZ: I’d been trained to defeat any enemy with sword, lance, or any other weapon, and to beat any chess master who dared challenge me, but leaving civilization for a place about which I’d only heard bizarre rumors and which doesn’t even have a library with more than five books was the hardest thing I’d ever done. That should give you some idea how important it was to find my father and bring his enemies to justice. As I said a few times, my life was worth nothing if I didn’t carry out that mission. But now I’ve lost my best friend and I’m still living the military life. At least before I left Madinat al-Zahra, I could see my mother every day.

JKK: I’m sorry things haven’t gone as well as you’d hoped. Was it all worth it? When were you happiest?

MGZ: You might expect me to say “back in Madinat al-Zahra, before I learned about my father and my violent destiny.” But no one knows that when I was trying to find out some information about my enemy, I met a Christian girl named Blanca Flor. She’s a few months younger than me, and she’s the most beautiful woman I’ve ever seen. I was happiest whenever she was near. To pinpoint a single moment, I kissed her for the first time right after I was baptized, soaking wet, with other Christians telling us we couldn’t do that in the cathedral. I haven’t seen her much since then because… Well, I can trust you with this secret. She’s the daughter of my enemies. I had to take revenge on her parents.

JKK: Oh, that is a problem. I’ll continue to address that in the next novel. When I started writing, I had no idea you were such a romantic. Can you tell me more about what drew you to Blanca Flor?

MGZ: Her innocence. I didn’t know she was my enemies’ daughter at first, and even when I found out, her openness and honesty, her lack of artifice, left me breathless. I grew up in the harem, so women are no mystery to me, but Blanca Flor is nothing like those women. The only woman she’s a little bit like is my mother, who only ever loved my father and me.

JKK: How would you describe yourself?

MGZ: Average height, brown hair, green eyes, stronger than I look. Everyone I met in Castile said I looked just like my brother, Gonzalo González, but I think he had brown eyes.

JKK: Sorry, I forgot medieval warriors generally think in terms of outward appearance. But since you bring it up, how does it make you feel to be compared to your brother? Did your parents expect you to turn out like him?

MGZ: My adoptive Christian mother didn’t know I existed for the longest time, but the way she looks at me sometimes, I know I must be doing or saying something my brothers did once. I grew up without brothers and without friends my own age, so it’s odd to be compared to anyone, especially someone I don’t know. My father remarked that I looked like Gonzalo when he first saw me, but since then, he’s treated me respectfully, like my own person. That’s really good of him.

JKK: Yes, your father’s a good guy. What influence did your family have on you, your choices, and your life?

MGZ: Family is everything, or was. It was hard to leave my mother, but I couldn’t live without knowing my father. When I discovered that, as you say, he’s a good man, it was one more argument in favor of going through with the revenge to save his status in his society, even though what little I know of Christianity leads me to believe any revenge might be wrong, even in their system.

JKK: It’s good to think about these things critically. How do you feel about your life right now? What, if anything, would you like to change?

MGZ: I’m sorry. Everyone in Castile is looking for me, so I can’t tell you much about my life at this moment. I have to admit, I’m considering giving up on everything and going to find Blanca Flor.

JKK: One more question and I’ll leave you to that decision. What can you tell us about the bloody cucumber?

MGZ: That incident happened before I was born in a land of which I may be the alcaide mayor, but don’t pretend to understand. What person in their right mind would dip a cucumber in blood and throw it at someone?

JKK: I’m with you on that one, in spite of the research that shows throwing a bloody vegetable at someone was a fairly common occurrence on the Iberian Peninsula before the year 1200.

Thank you so much for talking with me. It’s been an honor.

Born and raised in Northern California, J. K. Knauss has wandered all over the United States, Spain, and England. She has worked as a librarian and a Spanish teacher. While she read hundreds of thrilling stories for her PhD in medieval Spanish literature, the story of the seven noble knights, which first circulated as a now lost epic poem, stood out as the most dramatic and engaging. Writing an epic novel based on the old texts became an inevitable way to honor the characters.

Find her on social media and updates on the sequels to Awash in Talent and Seven Noble Knights and her other writing at her website: JessicaKnauss.com. Feel free to sign up for her mailing list for castles, stories, and magic.

Mudarra González ibn Zaida is a young, powerful warrior who was raised in the luxury and refinement of the capital of the Caliphate of Córdoba during its period of greatest splendor. When he finds out that his life was intended for bloody revenge in a distant land, he is eager to meet his father and his destiny. With his friend by his side, he rides north to change his religion and take on the burden of revenge while he struggles with doubts about the reasons for it. Only when he strays from the path set for him does he find his true purpose in life.

On the palace grounds at Madinat al-Zahra, Mudarra is competing against a chess opponent who is not as talented as he claims.

“No more distractions.” The governor hunkered down and put his arm to the side of his face, shielding himself from the sparkles and rainbows that continually danced around the quicksilver pool.

“As the sun travels higher in the sky, the archways will block the sun’s rays, my lord,” said Mudarra, offering the hope of future comfort to his agitated opponent.

“Make your move,” the governor grunted.

Mudarra stood to declare victory. He strode to the treasure chest to open it and distributed handfuls of coins among the lower-ranking warriors and less wealthy lords from Madinat al-Zahra, reserving nothing for himself. They happily collected and stashed coins and jewels about their persons, but the Governor of Segura stood up in order to tower over Mudarra with his full height, his turban, and its three feathers.

“You would be a generous lord, if only you had your own wealth to give.”

Mudarra’s patience with his opponent’s petulance and skills that didn’t live up to his reputation vanished. He faced the governor and leaned forward. Even though he lacked a turban and did not match the governor in height, he witnessed the other man’s miniscule retreat before the threat.

“I will always have wealth to give as generously as I please, whether you wish it or not.”

The governor’s cheeks turned bright red and his mole seemed to crawl in circles under his eye. He made a dismissive gesture. “Rather than wasting your time giving away other people’s wealth, you would do better to go looking for your father.”

The cut at the lineage he had so recently begun to question was more than he could bear. “You may be a governor, but you will not speak to me that way,” threatened Mudarra.

Mudarra looked around for a weapon. He didn’t want to seize a scimitar from the hip of a lord or a guest, so he picked up the chessboard platter and slammed it alongside the governor’s head. Ceramic pieces flew through the air and plopped into the pool of quicksilver, and the ripples sent slow-motion rainbows in so many directions, Mudarra felt that he was inside a soap bubble, floating in the afternoon sunlight. The governor fell back, unconscious, and blood ran from his nostrils.

“I do not know who my father may have been. I know only that I am not no one’s son,” Mudarra announced. 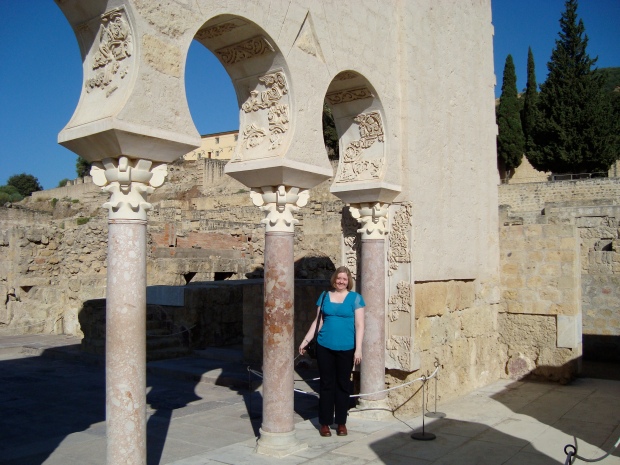 The author at the living quarters at Medina Azahara.