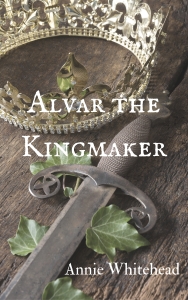 In a film, Queen Alfreda (Aelfthryth, to give her her historical name) would be the ‘supporting actress’ but her story is pivotal to my novel Alvar the Kingmaker. Abused wife of an earl, she takes her chance to flee when plague is followed by fire in 10thC London. At court, she puts herself under the protection of King Edgar, but she is in love with Earl Alvar, and remains so throughout their lives. Her story is one of murder, done by her, or in her name, and of children lost – by disease, and by cruel politicians who plot to keep her children by her first husband away from court and away from her. She will go on to be the power behind the throne during the reign of her youngest son, Aethelred, but for now she must use whatever means are at her disposal to stay alive and happy. We join her towards the end of the novel, where she awaits news that her protector, in the form of Alvar, has quashed the murder allegations against her.

I notice that she sits up straight and stiff when I mention the words ‘supporting actress’. She has proud bearing, even though the bags under her eyes betray the strain of recent events. She barely looks up when I sit down opposite her, and I feel more as if I am being granted an audience.

I decide that I should begin with the basics:-

AW: Where and when were you born?

QA: I’m not sure that you need to know when I was born; in any case you will be surprised, because I’ve often been told that I look much younger than I am. My father was a rich thegn from Devonshire. Please make sure your readers understand that I was a noblewoman by birth.

AW: What influence did your birth family have on you, your choices, your life? Explain why and how.

QA: Of course, with privilege comes restrictions. I was not free to make choices.

This interview is not getting off to the most auspicious of starts. I decide to move on, and ask her about her first marriage, to the son of the illustrious Athelstan ‘Half-King’, at whose palace she lived.

AW: You were a young bride, married into an influential family. Tell us what goal(s) you hoped to accomplish?

QA: My goal was, naturally, to run my own fine household, entertaining wealthy and influential guests. I also had high hopes for my children.

At the mention of children, I decide to try another tack.

AW: What really moves you, or touches you to the soul?

QA: My firstborn, my little Leofric – ah, what an angel he was. His was an easy birth and he slept for hours in his crib. He smiled from an early age, and his little chuckle was like a gurgling stream. When he laughed his little cheeks dimpled and his skin was warm and soft. My next born, Aethelnoth, well, he had much to say. He was born quickly, but loudly, and he would wriggle and sleep fitfully. He would explore every corner of his small world, and would put everything to his mouth. It was a joy to me that I had such different boys. I would bring them to my bed, to listen to their soft breathing; it soothed me to sleep.

Encouraged by this effusive response, I forget to look at my notes and I ask whether she is still close to her children. She places her hands back in her lap and looks down. I belatedly remember that she was denied access to her children after her second marriage. And so, moving on to think about that second marriage, and remembering the rumours, I continue my questioning.

AW: What’s the worst thing you’ve ever done? Why?

QA: I walked away from a situation, which led to dire consequences. Most would have stayed. But I couldn’t. And actually, it was the making of me.

Queen Alfreda looks up at me, her chin held high and proud. Like a film star daring me to prove the use of Botox, she seems to be daring me to substantiate the rumours that she might have had any hand in the death of her first husband. I can’t, of course, but she knows that as an author I have painted a stark picture of what I think might have happened.

AW: You say it was the making of you. So was your second marriage your greatest achievement? What are you most proud of about your life?

QA: My second marriage made me a queen, if that’s what you mean. The first ever anointed queen, no less. And it gave me two more children. My beautiful Edwin, such a sweet-tempered child, so loving. Until the fever… Excuse me, could I have a drink of water? Thank you. As I was saying, it also gave me my youngest, Aethelred, who will be a wonderful and wise king.

AW: Fate has played many unkind tricks on you, it’s clear. If you could relive your life, what changes would you make?

QA: What could I have changed? I might have asked for a kinder first husband. I might have wished for a second marriage which was free from step-children who hated me. I know you are wondering whether I was complicit in my step-son’s murder. No, I was innocent of that, at least.

I decide to rephrase the question.

AW: What do you want from life?

Queen Alfreda declines to answer, but makes a funny little noise, as if stating her desires would be pointless.

Perhaps I can draw her out.

AW: How did you feel when you first saw the love of your life?

QA: I wonder who you think that is? It confirmed all my preconceptions. Here was someone who would stand up for me, consider my feelings, and treat me with respect and a gentle touch.

AW: What drew you to the person you fell in love with?

QA: Now I am thinking of another man; my second husband, King Edgar. Initially he was an escape route. Nothing more, nothing less. My feelings grew only over time, and then they became very strong. But of course, falling in love is never wise.

AW: Tell us why you believe that falling in love is a curse?

QA: It leaves you vulnerable, and weak. But it can also give you hope, I suppose…

Her voice softened, I notice, with that last observation. This is a woman who is not yet old, but has a long list of vivid memories. Yet she seems to consider herself a victim, rather than the mistress of her own destiny.

AW: Tell us why you believe women really are the weaker sex?

QA: We are kept like that because it is men who make the rules.

AW: If you could live in a different historical period, which would you choose and why does it appeal to you?

QA: Is there another time where women can choose their own destiny? I would live there.

AW: How do you decide if you can trust someone?

QA: I listen to what they say. Then I see if their words come true. Until they do, I will not allow myself to trust. When Edgar, as a boy in my father-in-law’s court, suggested that he could free me, I said nothing. But later, when he was a king, he proved the truth of his words. I was loyal to him from that moment on – he was my protector. Until…

Her voice cracks. Perhaps we can finish with some slightly more trivial questions.

AW: When you walk into a room, what do you notice first? Second?

QA: How they are looking at me. Whether the person is friend or foe.

AW: When you walk into a room, what do you expect people to notice about you?

QA: I’ve been taught to make sure that they notice my beauty. It is the only weapon I have, but also it is my only defence.

AW: How do you feel about your life right now? What, if anything, would you like to change?

QA: I feel, at the moment, that my useful life is over. At the closing of these particular pages, I am at a point of change. My life from now on will be all about my youngest son, who is already a king, despite his youth. He will grow up to be a wise and well-loved monarch, of this I am sure. My personal ambitions were not realised – I don’t think I should give away too much, but the losses, for me, outweighed any gains I made from my prestigious marriages. If I should go down in history as a murderess, rather than the first to achieve the status of anointed queen, that would be a mis-telling of my story.

It is Queen Alfreda, rather than me, who signals that the interview has come to an end. Imperious, yet vulnerable, she thinks her tragedy is the loss of her children, but I think it is this: that for all her beauty, she has never been truly loved.

Annie Whitehead isn’t ‘from’ anywhere. She was born in Germany on British soil and has two birth certificates. Her father was in the army and the family lived all over the world, but she has lived in the Cumbrian Lake District since 1986. She graduated in history having specialised in the ‘Dark Ages’ but after a career break to raise her three children she qualified as an Early Years practitioner before concentrating on teaching Music to children aged 1-11. She has written three books about early medieval Mercia, the ancient Anglo-Saxon kingdom of the Midlands. The first, To Be a Queen, tells the story of Alfred the Great’s daughter, and was long-listed for the Historical Novelist Society’s Indie Book of the Year 2016, while the second, Alvar the Kingmaker, is the story of Aelfhere, Earl of Mercia in the 10th century. She hopes the third will be published early in 2017. When she’s not writing novels, she writes magazine articles and has had pieces printed in diverse publications, including Yoga Magazine and This England. She has twice been a prize winner in the Mail on Sunday Novel Writing Competition, and won First Prize in the 2012 New Writer Magazine’s Prose and Poetry Competition. She was a finalist in the 2015 Tom Howard Prize for non-fiction, and is also a contributor and editor for the English Historical Fiction Authors blog, as well as blogging for her own site – Casting Light upon the Shadow. When she’s not working or writing, she can generally be found living up to the title bestowed on her by her offspring and their friends – “Mother Hen”, or doing a spot of kick-boxing and weight-lifting.