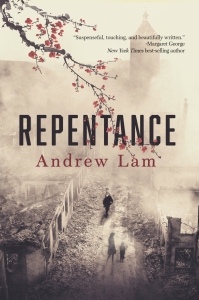 Repentance  is an historical novel and dramatic Japanese American WWII family drama that’s closely entwined with the history of the 442ndRegimental Combat Team—a group of Nisei soldiers who fought valiantly in Europe while some of them had families incarcerated in camps like Manzanar at home. The 442ndbecame the most decorated unit in U.S. military history.

AL: Where and when were you born?

AL: What kind of influence did your birth family have on you, your choices, and your life?

HF: My family? Don’t let my parents know I admitted this, but they’ve shaped me into who I am today. Obviously they made me do a lot of stuff I didn’t really want to do. Like go to Japanese language school. And spend my weekends on Dad’s rickety boat haulin’ in fish, followed by hours of unloadin’ those stinkin’ fish at Terminal Island. But I saw how hard they worked and it’s something to look up to, ya know? Still, I gave them a hard time for always telling me what to do and how to do it.

AL: Did they tell you to volunteer for the Army?

HF: Nope! You got me there! That’s the one thing I decided for myself.

AL: What did they say when you told them?

HF: We fought about it. They think I’m crazy to go.

HF: Isn’t it obvious? Uncle Sam locked us up in this prison. They gave us practically no time to leave our home so we lost everything. My dad’s boat was repossessed by the bank. My mom had to sell all our things—the piano, the beds, the dishes—to these bums who came through Terminal Island offering pennies on the dollar. We moved from our house into horse stalls at Santa Anita racetrack. Actual horse stalls! For weeks! Smelled like piss everywhere.

AL: I see. So, if you don’t mind me asking, why did you volunteer?

HF: To prove I’m man enough to do it. To show all those folks who hate us that I’m just as American as them.

AL: But you could die.

HF: That’s right. But millions of other boys are risking their lives too. What if I just sat out the war here? In this prison? And we win the war? And none of us Nisei lift a finger to help? That won’t change the minds of all the racists. They’ll still call us weak and say we don’t belong. Fightin’ is something I can do to make things better for us – Japanese Americans, I mean. Then maybe my kids will have a chance at living in an America where they don’t lock you up for lookin’ different.

AL: Where were you when Pearl Harbor was bombed?

HF: I was sixteen. A high school sophomore. But it was Sunday morning and I was out on the water with my dad. He got the news over the radio and we came right back in. Couple days later, a couple G-men came to search our house and the boat. They confiscated our radio and said my dad couldn’t take the boat out anymore.

HF: They thought he might be working for Japan—that he might be communicating with Japanese submarines or taking fuel out to them. It was ridiculous.

AL: I know you’re leaving in about a week. What kind of send off will you get? How are you going to leave things with your parents?

HF: I dunno. My mom and dad are giving me the silent treatment. I know they’re worried. But I gotta do this. Other guys are goin’ against their parents too. We’re scheduled to leave real early in the morning, before anyone else is awake. Kinda like we’re sneaking outta here, I guess. Suits me fine. It’ll be nice to not live behind barbed wire anymore. Hopefully my dad will shake my hand. He knows what happens in war. His uncles actually fought for Japan in their war with Russia forty years ago. But heck, this is depressing. Let’s look at the bright side! At least they’ll have a little more space in the barracks with me gone.

AL: How small it is?

AL: For your parents and you?

HF: And my brother. And another family with their kid.

HF: Yeah. They had a four-year-old boy. We hung a blanket cross the middle to make a separation.

AL: Oh. I see. Well, um, let’s talk about your next step. Where are they taking you? Where do you expect to be stationed?

HF: First, we’re going by train all the way to Mississippi. A place called Camp Shelby. Word is, it’s real hot and swampy. After basic they say we’ll be off to Europe. Italy most likely. That’s where the 100this now.

HF: Yeah. The 100thBattalion. It’s a group of Nisei from Hawaii that got mobilized last year. They’ve already been tearing it up against the Germans in Italy. We’re part of a new group called the 442ndRegimental Combat Team. They can’t send us to the Pacific – our own guys might shoot us, looking like the enemy, ya know what I mean? I did hear some Nisei are goin’ over to help General MacArthur as interpreters and such. But that’s not for me. I can’t speak a lick of Japanese.

AL: Are you nervous?

HF: Course I am. But it’s too late to back out now.

AL: Do you have a girlfriend you’re leaving behind?

HF: Sure do. Prettiest girl in the camp.

AL: Why don’t you want them to know?

HF: It’s just…things get complicated here in camp. Old folks can be funny, ya know? Honestly, I think her parents are hopin’ she’ll meet some college boy or someone like that.

AL: You’re not going to go to college?

HF: Me? Shucks. How would I ever afford that? But once I earn a little dough and go back to L.A. after the war, I’m planning to start my own landscaping business. I’ll work so hard—I know it’ll be a success. Then her parents will have to approve. That, or maybe I’ll come back a big war hero. Who knows?

AL: Is that your back up plan?

HF: Sure! Ain’t it everyone’s? I should call that Plan A!

AL: What did your girlfriend say about you heading overseas?

HF: She said, “Don’t be a hero.” And I said, “But that’s my name!” [Smiling widely] Somehow, she didn’t find it as funny as I thought she would.

AL: Well, good luck over there. Stay safe. Make some new friends. Win the war. You know what I mean.

HF: Yep. Will do. Thanks for the chat. 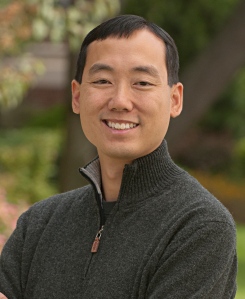 Andrew Lam, M.D., is the award-winning author of three books: Saving Sight, about his career as an eye surgeon; Two Sons of China, which won a Foreword Reviews’ Book of the Year Award in 2014; and Repentance.His writing has appeared in The New York Timesand The Washington Post. He is currently an Assistant Professor at the University of Massachusetts Medical School and lives with his wife and four children in Longmeadow, MA.