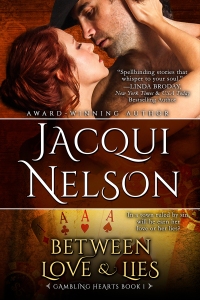 Today I’m thrilled to introduce you to the hero of the first story in my Gambling Hearts series. Noah Ballantyne is the strong silent type struggling with a tortured past, so I was happy when he opened up and shared his life with me. In Between Love and Lies, Noah believes he has only one chance to finally do something good. In 1877 he returns to Dodge City to save a woman whose future depends on maintaining a lie so deadly it could end her life quicker than the wicked inhabitants of Dodge, a place some call the Queen of Cattle Towns or the Sin City of the 1870s.

JN: Hello, Noah. Will you tell our guests (who might have traveled from some far away times and places to join us) when you were born and where you’ve lived?

Noah: I was born in 1849 and lived my entire life on my family’s ranch in the Texas Hill Country. Well, now I’ve told a lie. Lies are complicated and often take on lives of their own. I learned that hundreds of miles from home in Dodge City. So, I’d best not wander from the truth. Twice I spent two months coaxing a couple thousand longhorns up the six-hundred mile trail between Texas and Kansas. I also endured several weeks in the hell that is Dodge City after that second cattle drive.

JN: Before we get to the hellish parts, what was your first, best memory?

Noah: Playing hide ’n seek with my younger brother, Jacob—especially the day he fooled me by hiding under a washtub because he was so much smaller than me.

Noah: I lived when my brother died. I should’ve saved him, but I couldn’t. Then, not long afterward, I didn’t stop my cattle from destroying a woman’s home and livelihood.

JN: How did you get through those dark times?

Noah: My brother was my one reason for making something of our family’s ranch and my life. The only thing that saved me was a year after Jacob’s death I returned to Dodge and found redemption and a reason to live again—with Sadie, the woman whose life I previously destroyed.

JN: You mention your brother, but not your parents. Were they a part of your life?

Noah: My parents were my entire life until I turned eleven. That year my father was killed in a range dispute and my mother died not long after while giving birth to Jacob. The Ballantyne ranch foreman and his wife took over raising Jacob and overseeing the land while I insisted on spending all of my time mastering the many duties of maintaining a profitable cattle business so I could keep our home in our family.

JN: If you could relive your life, what would you change?

Noah: I’d save my parents and Jacob. I don’t know how, but I could at least forbid Jacob from coming with me on that first cattle drive. I wouldn’t want to stop that trip though, because then I’d never have met Sadie. Thinking about changing the past is a tricky subject. Yes, I would stop my herd from trampling Sadie’s farm. Her land was as precious to her as mine is to me. But Sadie’s challenges went beyond the loss of her land. So, if I had the power to change the past, I’d find a reason to camp outside her sod house and watch over her. Even though she’s one of the most determined and resourceful women I know, I wouldn’t let her endure everything that happened during my year-long absence following our first meeting.

JN: Speaking of that first meeting, how did you feel when you first saw Sadie?

Noah: Stunned. My cattle where trampling her farm. She tried to shoot me with her shotgun. Luckily her father stopped her. As far as I know, that’s the only helpful thing he ever did. Thinking about what he did after that day, makes my heart hurt even years later. I think I loved Sadie from the very beginning. I’ve certainly thought about her every day afterward.

JN: You make meeting Sadie sound like your best and worst day. Would you say love is a gift or a curse?

Noah: Falling in love is a gift, but resisting love is a curse. When I stumbled into Sadie’s life and then couldn’t get her out of my head and my heart, I resisted. I told myself I only wanted to help Sadie. I almost got us both killed. I was so intent on righting a wrong and being honorable, that Madam Garrett nearly got away with murder.

JN: Madam Garrett was a powerful woman in a town filled with mostly men. She owned and ran Dodge’s Northern Star Saloon and therefore controlled the lives of every woman and man who worked there. Would you consider Madam Garrett to be the strongest woman you’ve ever met?

Noah: Sadie was and is stronger. She was willing to gamble her health and her life to fulfill her friend’s last wish and win her freedom by her own hand. After her father’s final betrayal, Sadie spent a year working for Madam Garret but stayed out of the clutches of the countless wicked who descend on Dodge and sometimes never leave. I don’t blame Sadie for trusting no one there and vowing to do everything on her own. But her decision to give up her plans and her life to save me is something Madam Garrett could never have the strength to do.

JN: When you walked into Madam Garrett’s saloon, what did you notice first?

Noah: When I came back to Dodge, I came only to find Sadie. But I was looking for a farm girl not a strumpet. So when I strode into the Northern Star, I never thought I’d discover Sadie there. The first thing I heard was a woman singing The Yellow Rose of Texas. Her voice drew me like a parched man to a waterhole. The room was jam-packed with cowhands, trail bosses, and cattle barons—all looking at the scantily clad woman singing on stage. The woman I’d come to ensure was safe. Sadie was so far from safe it made it hard to breathe let alone think properly.

JN: What are you most proud of in your life?

Noah: My ranch was my pride and joy until I became consumed with trying to help Sadie. I couldn’t save my brother or my parents, so I hinged my redemption on Sadie. Now I’m most proud that Sadie and I became a great team. We saved each other. Life is full of many challenges, but when love makes us stronger those challenges seem smaller.

JN: What do you value most in your life these days?

Noah: Old and new friends. Lewis Adams and I grew up on neighboring ranches. He proposed an outrageous plan that allowed me to spend time with Sadie—after she refused to be anywhere near me. When I first met Doctor Rhodes in Dodge, I blamed him for Sadie’s deteriorating health. But he proved he had skills beyond those of a doctor’s. I’m certain Marshal Masterson hired me as a source of amusement as well as his deputy. Nevertheless the wily lawman was there when I needed him most. Then there’s Madam Garrett’s scar-faced giant of a barkeep, Handsome John. I’m not sure I’d call him a friend, but he played a part in keeping Sadie alive. Now Sadie is my best friend and the love of my life. She helped me find value in myself again. The future is once more beautiful on my family’s ranch, because a stubborn farm girl turned saloon singer gave me a second chance. Then she agreed to come home with me.

JN: Speaking about the future, what are your hopes and dreams for the days ahead?

Noah: As long as Sadie is by my side and I can continue making her smile, I’m happy. 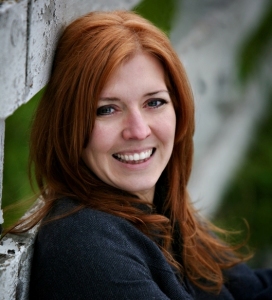 Jacqui Nelson writes historical romantic adventures set in the American West. Her stories include an Oregon Trail scout, an ex-Rebel spy turned government rabble rouser & a Dodge City cardsharp gambling with love & death. Those are her heroines. Wait till you meet her heroes! Her love for the Old West came from watching classic Western movies while growing up on a cattle farm. She’s won the RWA® Golden Heart® for historical romance & the Laramie® for western romance drama–but her best reward is hearing from readers who’ve enjoyed her stories.

About Between Love and Lies:

In a town ruled by sin, will he earn her love or her lies?

Sadie Sullivan lost everything when a herd of longhorn cattle bound for Dodge City trampled and destroyed her farm. Now she works in Dodge—one of the most wicked and lawless towns in the West—at the Northern Star saloon. But her survival in this new world of sin and violence depends on maintaining a lie so deadly it could end her life before the town of Dodge can.

The one man capable of unraveling all of Sadie’s secrets is Noah Ballantyne, the Texan rancher whose herd destroyed her home. Back in town and taking up the role of deputy alongside legendary lawman Bat Masterson, Noah vows he won’t leave until he’s made things right. But with the saloon’s madam unwilling to release Sadie and a rich cattle baron wanting her as well, the odds aren’t in favor of finding love…or leaving town alive.