Every writer knows that research, vital as it is for a writer of historical fiction, can lead you into a rabbit warren of facts, information, and ideas until you’ve wandered far from your own work into strange new worlds. What you find may not all be useful for the task at hand, but it can be fascinating. While researching the subject “Orkney,” (an admittedly broad topic that can bounce you between the fifth century and the twentieth in seconds) for a new book, I encountered the Countess of Orkney. I quickly realized that she nothing to do with my story and precious little to do with the Orkney Islands. What I did find was yet another nest of Victorian eccentricity. I couldn’t resist.

Constance Macdonald Gilchrist —known as Connie Gilchrist—was a child of London’s less salubrious neighborhoods and the daughter of an engineer, or more likely mechanic, and a stage door mother.  At approximately six years of age she went to work as a model for the painter Frederic Leighton. She probably worked even eariler than that. The most famous of his paintings featuring her is “The Music Lesson” (though I prefer “The Reading Girl” for one). She also posed for James McNeil Whistler, Frank Holl, and other members of Royal Academy of Arts. 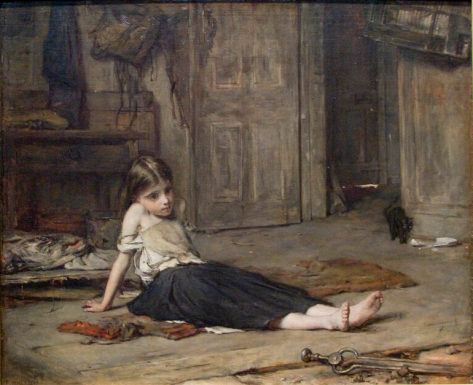 Frank Holl, Faces in the Fire

She began her stage career at Drury Lane at eight, and moved to the Gaiety Theatre when she was fourteen in 1879. She also appeared in popular pantomimes at the Adelphi Theatre and Myers’ Circus Company in Paris, and even did some straight acting. at twenty-one toured America, returning to England to yet more roles at Drury Lane. The list of plays she appeared in is long, but she was initially known primarily as a dancer. Oddly, she was well known for a skipping rope routine. Whistler’s Harmony in Yellow and Gold portrays her with her skipping rope. Lewis Carroll, after a brief obsession with her, complained that at thirteen she was losing her looks. He thought her acting had declined but that her rope skipping dance was excellent. The University of Pennsylvania library owns a photo of Gilchrist with Carroll’s characteristic initials on the back, the only reference I could find of him photographing her.

She was without a doubt a huge star and in much demand. She was also pushed very hard by her mother who apparently expected her to pull the family out of poverty. There are stories of her being beaten, and of working late into the night only to be dragged out of bed, washed, dressed and trundled off to pose for artists in the morning. She became so exhausted, it was reported, that she had to be held up on occasion.

Connie worked steadily through her teens and twenties, while trading on her very child-like appearance. By seventeen she was the protégé of the Earl of Lonsdale who died about that same time and left her a house. Soon after she was taken under the wing of the 8th Duke of Beaufort who became her adopted father. Since he was forty years her senior and gave her away at her wedding, perhaps the relationship was fatherly, although some authors don’t hesitate to call her his mistress. 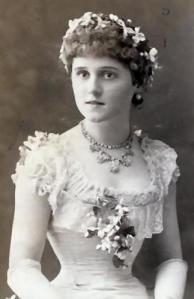 The 7th Earl of Orkney, Edmund FitzMaurice met her a little less than ten years later. He was a year younger than she, and had lost his father and elder brother giving him the title in his early twenties. It is likely, giving the life she had led, that Connie was, at twenty-seven, much older than he in experience. They married quietly in July, 1892. Such a scandal! They were not received in many parts of society. They don’t seem to have cared. They retired to the country, where the overworked, used, and abused little girl of the London slums lived a quiet life for the next fifty-three years. The two of them share a love of horses, dogs, hunting and outdoor activities and even opened a hunting lodge. She was much respected, known for her grace, charm, and abundant charity work.

As renowned as she was in her teens, her fame faded. An exhibit of works by Frederic Leighton in 2018 brought a resurgence of interest in her.

In spite of the title, the earl held no land in Orkney, and may never have even visited the place. Connie certainly did not. Their only daughter predeceased her father. As to the title, it passed from cousin to cousin. The 9th earl (also known as the 9th Viscount Kirkwall) is a professor at the University of Manitoba, Canada. He has actually visited Orkney and stated an interest in buying land there.

For more about Connie and the Earl:

Caroline Warfield works in an office near her adopted city of Philadelphia surrounded by windows where she writes family centered novels set in the Regency and Victorian eras and nudges characters to explore the riskiest territory of all, the human heart. Music on the Waters, a novella she wrote after a visit to Orkney, sprung to print quite unexpectedly this spring. It is currently available for pre-order.

3 thoughts on “The Child Star”