A Brief but Spectacular Life 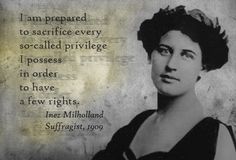 My interest in the footnotes of history and lesser-known heroes have led me to a woman of whom I had not heard until I stumbled upon her in my research. American women owe Inez Milholland Boissevain a debt for the part she played in advancing the cause of women’s rights. Errant Vassar student, suffragette, labor lawyer, World War I correspondent, and public speaker, Inez packed more into her short life than most of us achieve in a lifetime. 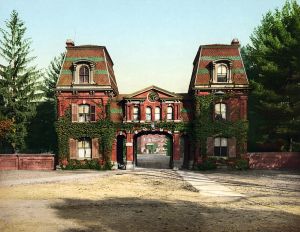 Born in New York in 1886 to John and Jean Milholland, Inez’s parents were able to provide an intellectually and culturally stimulating environment for their three children. Her father started his working life as a reporter and editorial writer for the New York Tribune, but moved on to business ultimately heading a pneumatic mail tube company. Their financial situation was such that the family maintained homes in both New York and England. Inez spent much of her adolescence in London where she attended the Kensington High School for Girls. In the school’s progressive environment, the daughters of earls studied alongside shopkeepers’ children because class distinctions did not exist within its walls. Her application to Vassar was initially rejected, but after additional study at the Willard School for Girls in Berlin where she received an acceptable diploma, she returned home to the US for college.

At Vassar, Inez was involved in the college experience in every conceivable way. She was an outstanding athlete, playing basketball, tennis, golf, field hockey, and breaking a campus shot put record. In addition to sports, she was a member of several clubs, on the debate team, acted in college dramas, became involved in a children’s cause in the community, and was president of her junior class. This would have been more than enough for most young ladies, but an encounter during the summer between her sophomore and junior years changed her life.

Back in London, she met the notorious Emmeline Pankhurst and joined her Women’s Social and Political Union. Pankhurst and her suffragettes chained themselves to fences and refused to stand down in their demonstrations calling for women’s rights, especially the vote. When arrested and imprisoned, they went on hunger strikes and were force-fed by tubes rammed down their throats. When these tactics failed, they moved on to more violent means.

Inez brought this fervor back to the Vassar campus where her ideas and attendant activities were not well received by the administration. Her first volley over the bow of entrenched patriarchy was an article for the Vassar campus magazine describing her adventures with Mrs. Pankhurst and decrying the lackluster state of the American suffrage movement by comparison. Since suffrage was a taboo subject on the Vassar campus, Inez and those she attracted to the cause held an organizational meeting in a nearby cemetery. Attending were 40 students, 10 alumna, and suffrage proponents from the community and New York City. This was the beginning of the Vassar Votes for Women Club, which continued to meet off-campus under Inez’s leadership. While the Vassar website makes no mention of it, some sources say Inez was suspended from college at one point in her battle of wills with the college president, James Monroe Taylor who strictly forbade any discussion of suffrage on campus. One might conclude he was delighted to see the last of Miss Milholland when she graduated in 1909.

After graduation, Inez’s interests broadened to include the law and writing for the socialist journal, The Masses. Rejected by several Ivy League law schools, she was admitted by NYU where she graduated in 1912 and became a clerk in a NYC firm. In 1913, she defended labor leader Elizabeth Gurley Flynn who had been arrested during a textile strike. That same year, she made her most celebrated appearance in support of women’s suffrage by leading a massive Washington D.C. parade the day prior to Woodrow Wilson’s inauguration. Sitting astride a white horse, a crown upon her head,  and dressed in a flowing white cape, the beautiful young socialite turned activist must have been an awe inspiring sight. When a crowd drunken men attempted to impede the marchers’ progress, it is said she turned her horse on them and they scattered. That same year, she proposed to her future husband, Eugen Boissevain, whom she married later that year and with whom she maintained an open marriage as a believer in free love.

When war broke out in 1914 Inez, like so many of her colleagues, believed the US should stay out of the European conflict. To get a first hand look, she went to Europe on Henry Ford’s Peace Ship in 1915. She stayed on as a war correspondent until Italy kicked her out of the country due to her pacifist views. She returned to the US and took up the cause of women’s suffrage once more joining a national tour of the National Women’s Party. She drew large crowds wherever the tour stopped.

It was while on tour that Inez developed an infection from which she would not recover. As a suffer of pernicious anemia, her immune system must have been particularly weakened. She collapsed in Los Angeles on November 25, 1916 and was taken to a nearby hospital where she died. She was only 30 years old. 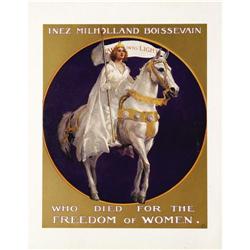 The National Women’s Party proclaimed her a martyr to women’s rights, but her fame faded until today she is a rather obscure figure from a long ago movement. I suppose there is some cause for celebration in the fact that women now take the vote for granted. We tend to forget we once were second class citizens without personal or property rights, which is an indication of just how far we have come. 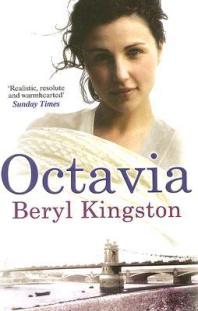 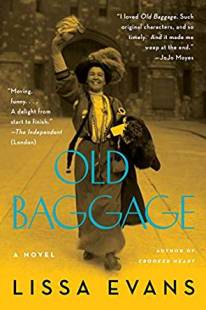 4 thoughts on “A Brief but Spectacular Life”