Naming Rights and the First Governor of New Jersey

The source of place names always fascinates me. We are at the shore this week, enjoying Cape May Point with family. It has me wondering about the name of the place. Who was May and why was it named for whoever that is? The answer turned out to be complicated, as I should have guessed given the complexity of Mid-Atlantic history.

When I first saw the name I hoped it belonged to a woman. A storyteller could easily spin a tale of one May Jones, lady pirate, ship captain’s one true love, or an early colonist who died tragically. No such luck. Early explorer then? Surely May is an English explorer! Wrong again. 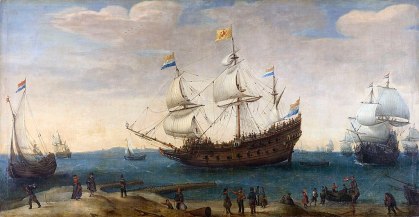 Dutch merchant ships, part of the largest fleet in Europe in the 17th century

Early explorers of the Cape and the bay it borders were in fact Dutch. Henry Hudson may have been English but he explored the area on behalf of the Dutch. He got here first and described it, but he didn’t name it. Besides, he already had another river and another bay named for him. Cornelis Hendricksz surveyed the area on behalf of one of the competing Dutch companies, but didn’t name the cape. Who then?

Cornelius Jacobsen May (or Jacobzoon Mey), Dutch to his core, came from the village of Schellinkhout, just east of the city of Hoorn in the Netherlands, during the height of Dutch sea power. His brother was also a sailor and his cousin circumnavigated the world in 1614-17. Cornelius in the meantime, partnered the New Netherlands Company to explore and set up trade along what is now the Delaware Bay and River. He explored the area and began trading with native peoples before 1620 in the ship Blijde Boodschap (“Joyful Message”).

The story of competing mercantile companies exploring the Delaware Valley, including one who sold rights to the Swedish company that established Fort Christiana, named for a Swedish queen, is too convoluted for today’s purposes. The Dutch don’t appear to have wasted energy on names, and clearly didn’t name places after royalty. They tended to use descriptive words. They called the river that led to the bay and the bay itself the Zuidt Rivier or south river. They called the river that flowed into it at what is now Philadelphia the Schuylkill or “Hidden River,” due to its overgrown mouth. 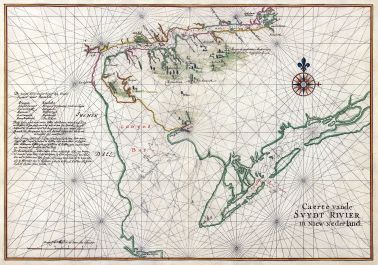 The Vingboons Map of Delaware Bay – 1639

Oddly, though it remained Zuidt Rivier on Dutch Maps, by 1640 the English were already ignoring the Dutch name and referring to the bay and river as Delaware after the governor of the English colony to the south at Jamestown. Lord De La Warr himself never actually even saw the features named after him.

May plodded away, trading, creating settlements, and bringing in colonists in the face of the volatile competition. Eventually the Dutch States General stepped in and created a colony or province in the Delaware Valley with May as the Director, making him in effect the first governor of New Jersey. Is that when he ensured that his name would be immortalized on the cape at the mouth of the bay? Hard to say. It was in place by 1639 when the name “Cape May” appears on a map by Johannes Vingboons. It stuck. Zuidt Rivier, however lost out. Delaware it is.

I have never read a fiction book set in Cape May. Perhaps now is a good time to start; i found a few. Or maybe I should write one. 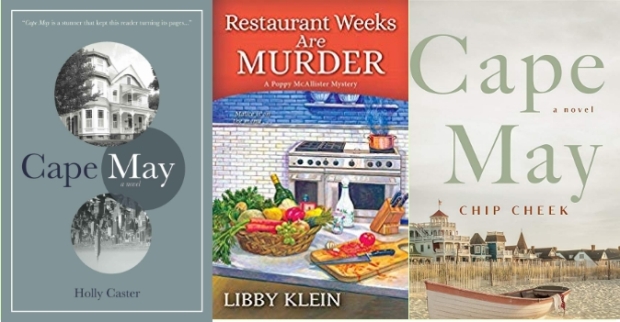 One terrific history of Dutch North America is The Island at the Center of the World by Russell Shorto (Vintage Books, 2004)

Caroline Warfield is a writer of historical romance and family sagas covering the late Georgian, Regency, and Victorian periods. She is currently expanding her novellas “Roses in Picardy” and “The Last Post,” which take place in and around Amiens in 1916 and 1919, into a full length novel, Christmas Hope, to be published in mid-October.

← Elizabeth Loring–Patriot or Loyalist?
A Brief but Spectacular Life →