As this week marks the 75th anniversary of Rosie the Riveter, the iconic symbol of women filling in for men at industrial job sites while they were fighting an overseas war, it’s a good time to pause and reflect on the status of women in the work force today. World War II was the first time a wide-scale employment of women outside the home was called for, and it signified the start of women entering the industrial job force, doing work that previously had been strictly the domain of men. The aviation industry was the main employer of these women, employing more than 310,000 women in 1943, which equated to 65 percent of the work force, as compared with 1 percent prior to the war. These women were critical to keeping the war effort going, but they were paid roughly half what their male counterparts had made. 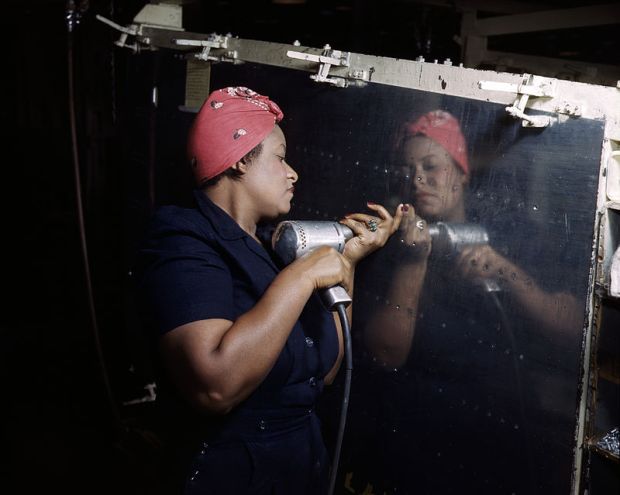 The Riveter poster was first created by the artist Howard Miller. The woman depicted twenty-year-old Naomi Parker working in a machine shop in Alameda, CA. A photographer snapped a picture of her in a blue jumpsuit with her hair tied back with a polka-dot bandana, which Miller used to create his iconic poster. The poster created by Miller was produced by Westinghouse in 1943 to encourage more women to enter the wartime job force.

Rockwell’s version may have been the rage in the 1940s, but the Miller version returned with a vengeance in the 1980s, due to a number of factors—in an effort to raise funds in the face of Reagan-era budget cuts, the National Archives licensed the image to sell it as souvenirs. The 1980s was also the 40thanniversary of World War II, and it was a pinnacle period in the women’s rights movement.

The strides taken since then to level the playing field between the sexes on the job front have been huge, but not complete. But there are some things that were done during Rosie’s time that were quite ingenious and are being considered again.  The author, GG Wetherill voiced a legitimate concern in 1943. He wrote “The hand that holds the pneumatic riveter cannot rock the cradle at the same time.” If the government wanted women to join the workforce, they needed a solution to the childcare issue. 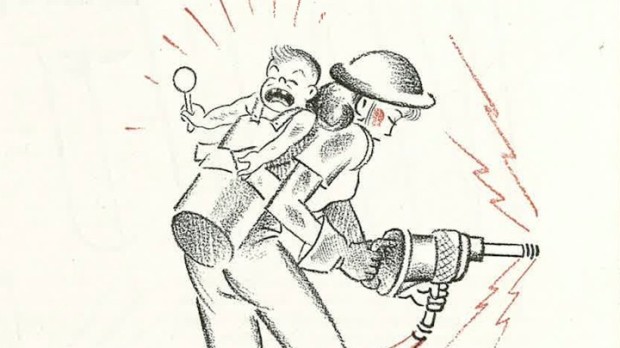 Image of Rosie the Riveter that appeared in a 1943 issue of Hygeia, a magazine produced by the American Medical Association.

And Uncle Sam stepped up. The government formed a far-reaching, heavily-subsidized childcare program. Mothers on the night shift would bring their children, dressed in pajamas, and drop them off at the child care facility, where they slept, along with hundreds of other children, while their mothers toiled. Women who worked on the day shift would rest easy knowing their children were being fed and cared for. Children from two to five years of age could be cared for at these facilities for 50 cents a day, which included lunch and snacks.

As one legislator stated in front of the Senate, “You cannot have a contented mother working in a war factory if she is worrying about her children and you cannot have children running wild in the streets without a bad effect on the coming generations.”

These childcare programs were established late in 1942, to keep anxious mothers and raucous children content. Between 1943 and 1946, about 3,000 childcare centers were in operation, taking care of approximately 130,000 children each year.

Life wasn’t all rosy for the Rosie Riveters, though. Resistance from husbands and other family members was a constant, with only 30 percent of husbands supporting their wives entering the industrial job force. After a long day on the plant floor, these women still had to take care of their homes and prepare food for their children. And, even though they were paid only half as much as men in similar jobs, they were considered expendable at the end of the war, and let go from their positions once the men returned from overseas.

However, without this comprehensive childcare initiative begun during this time of crisis in the labor market, the concept of day care would have been much longer to take root. Although the cost of day care today prohibits many women from reentering the labor market after childbirth, universal child care is again being discussed as an option to help level the playing field of employment. Imagine the stress relief that would happen in today’s job market if every employer offered subsidized childcare. As Rosie herself would say: “We can do it.”

Becky Lower loves to write about strong women in America who defy convention. She attributes her love of this type of woman on her mother, who, during the 1940s, had the unusual job of a pin-setter at a bowling alley. Her father came in for a game with some pals, and, as was customary, wanted to tip the pin-setter once the game finished. To his surprise, a woman appeared from the bowels of the bowling alley instead of the young man he expected. Right then and there, he knew he’d found a treasure. Keep on top of what’s going on in Becky’s professional life by visiting her blog: http://www.beckylowerauthor.blogspot.com

← War and Remembrance: the Origins of Memorial Day
Battery 223 and a Day at the Beach →

5 thoughts on “Rosie the Riveter”