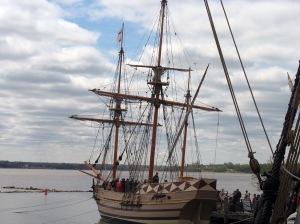 Jamestown Settlement, Reconstruction of the Godspeed

Did you know there are two Jamestowns to visit? It is a bit disconcerting when you follow the Colonial Parkway and come to signs pointing in two directions. We went straight, toward Historic Jamestowne and skipped The Jamestown Settlement. What is the difference you might ask? Their web addresses may give you a clue.

The first has a few monuments, holes in the ground, and enthusiastic volunteers. The second has costumed re-enactors and reconstructed ships.

After years of historical travel, we have a strong preference for rediscovery and restoration over reconstruction and raw over packaged. Perhaps when our children were small we might have gone with the reconstruction, but we like our history unvarnished, and Historic Jamestowne, aka the Jamestown Rediscovery Project fit us perfectly. 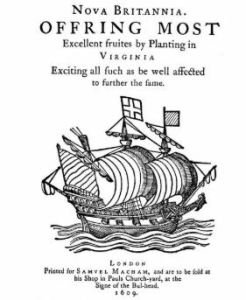 We heard they had located the actual site of the original fort, so we signed up for a guided archaeology tour and set out down the boardwalk over the swamp that bedeviled the original settlers, and enjoyed one of the best guided historical tours I’ve ever experienced. The speaker did a masterful job of setting the historical and natural context for the settlement, both in terms of the environment and the original peoples of the area and in terms of European economic, political, and religious conflicts, and set about a history of the site itself. “History,” he suggested, “is an opinion. Archaeology uncovers fact.” 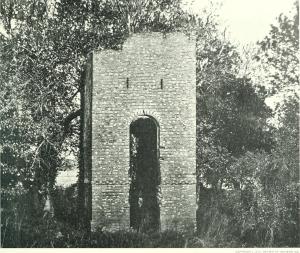 The Church tower, from The Photographic. History of the Civil War, in the collection of the New York Public Library

Virginians never forgot the location of the first settlement, but they did let it fall into disuse. Never a particularly salubrious site—the island has no fresh water, for example; dug wells turn brackish in the periodic droughts—floods and fire plagued the early capital. After the capital relocated to Williamsburg in 1699, the settlement gradually faded away. By the mid 1700s the church was abandoned and the land became farmland. Even that died away. Confederate soldiers occupied the island during the Civil War to protect the James and Richmond. No sign of the 1607 settlement remained and folks believed the river eroded the bank, taking the original fort with it, putting the site vaguely “out there” in the river. Only a brick tower, a remnant of the church built most likely in the 1680s, remained.

The Civil War may have left Virginia depressed but Virginians have always had great pride in their history. The Association for the Preservation of Virginia Antiquities (later called Preservation Virginia), founded in 1889, set out to act on that pride. One of their first successes was the preservation of the colonial powder magazine in Williamsburg. In 1893 they accepted 22.5 acres of Jamestown Island from its owners, including the old church tower, to preserve it. They built a sea wall along the shore to prevent further erosion. 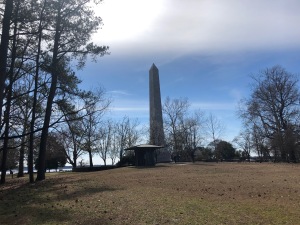 As the 300th anniversary of the founding approached in 1907 monuments and memorials dotted the site. There is a statue of John Smith and a highly anachronistic one of Pocahontas. There is a large bronze bas relief celebrating Reverend Robert Hunt, the first Protestant minister in North America. Other plaques and an obelisk with unveiled. They uncovered the foundations of the 1647 church and built a memorial chapel on or near those foundations.

In 1934 the National Park Service obtained the remaining 1500 acres of the island, and hired CCC workers to do some digging to locate building foundations outside the Preservation Virginia tract in what could be called “new town,” (i.e. later seventeenth century) settlement area. For most of the twentieth century, however, the site sat as a park with tributes to the European founders—universally heroic, English, and Protestant. Toward the end of the century attitudes and Ideas began to change. A group of archaeologists led by Dr. William Kelso questioned the long held belief that the original fort had eroded into the river. They had three reasons. 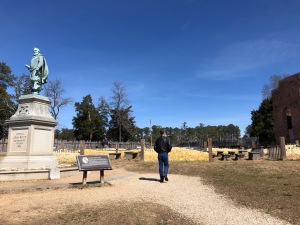 After ten years of negotiations with Preservation Virginia, scientific excavation—the Jamestown Rediscovery project—began in 1994. They hoped primarily to identify the site of the original fort and to have something to show visitors by the 400th anniversary in 2007. Within three years they had uncovered the outline of the 1607 fort, 80% of which was on dry land near the chapel. Since then they have recovered over two million artifacts that flesh out—and sometimes upend—our understanding of life in Jamestown. Discoveries include: 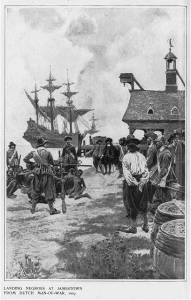 2019 marks two more significant anniversaries with their roots in Jamestown.  Taken together they shed light on the  complexity of the United States history from its founding, highlighting both liberty, in the form of free elections, and slavery. The first enslaved Africans arrived in Jamestown in 1619. One of the African women from 1619, Angela, has been identified by name and recorded as enslaved in the house of William Pierce. Jamestown Rediscovery has focused new energy on recovering that household in the National Park area of the site. That excavation is actively in progress. Also in 1619 the colony, after ten years of contentious leadership, elected a legislative body, the House of Burgesses, the first elected legislature in North America. At least the male, white, Protestant members of the colony elected that body. Jamestown Rediscovery will highlight both events.

For more information check out the interactive Map of Discoveries, or try these links:

Caroline Warfield is a writer of family-centered romance set in the Regency and Victorian eras who sits in an office surrounded by windows and occasionally travels to fire her imagination. She is currently writing The Seekers: the Price of Glory, a romance involving an French woman who is a healer or hakima, an Englishman determined that his glory lies in Nubia, and the conflicts between Egypt and the Ottoman Empire in the late 1938-1841.  You can find her here: