Party with Your Boots On!!

I am going to break into my series on American castles to share a taste of true Texas heritage and tradition. As the saying goes, I was not born in Texas, but I got here as fast as I could. My husband and I have now lived in the Lone Star State longer than anywhere else in our lives. Our children were born here. Texas is home.

It is said that Texas is not Southern and Texas is not Western. Texas is simply Texas. Nothing makes this point more clearly than the Houston Livestock Show and Rodeo, which  has just been completed its 86th run to sellout audiences in NRG Stadium. Since 1932, Houstonians and Texans have returned to their roots in a celebration of heritage that has evolved into one of the biggest scholarship fundraising efforts in the state.

The excitement, pageantry, and drama of the rodeo competitions and livestock exhibitions, judging, and auctions is matched only by the all-star entertainment and the enthusiasm of the crowds. Most amazing fact? It’s all done with volunteers – over 33,000 of them each year. The planning and behind the scenes organization is a year long process. For the committee chairmen, committee members, directors, and board members, preparation for the next year’s rodeo begins immediately upon the completion of the current year’s events. 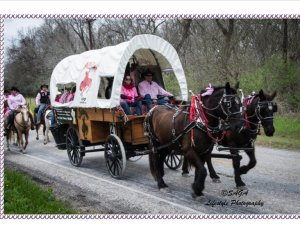 One of the first visible signs that we are entering rodeo season is when the Trail Bosses of the various Trail Rides start organizing their riders and their overnight camping locations. In all, 11 Trail Rides converge on Houston at Memorial Park to camp out and take part in the Rodeo Parade through downtown the Saturday before the gates open at NRG. By the time they arrive, 1,300 miles will have been ridden on horseback and in covered wagons. The longest distance traveled is 239 miles by the Mission Trail Ride which originates in San Antonio. The oldest and best known is the Salt Grass Trail Ride. In 1952, four men rode from Brenham to Houston. The next year, 80 people made the ride. By 1954, there were 800 Salt Grass riders. Trail Riders show their Go Texan pride by spending a few weeks each year living as our ancestors did.

Other events associated with the rodeo include horse shows put on by bred associations, chili cook-offs, BBQ cook-offs, wine judging, poultry and livestock judging, a statewide art show for students in grades K-12, a carnival with rides, vendors selling everything from bespoke handmade boots to corndogs – the list is long. High school students in FFA and 4H programs raise animals for show.

Prize winning animals are then sold at auction with the proceeds going to the scholarship fund. The 2018 Grand Champion Steer went for $410,000, a new high. The Reserve Grand Champion sold for $366,000. The students whose animals take prizes receive scholarships, not the sale price. Over 17,000 scholarships have been awarded since the program began in 1957. Presently, there are over 2,000 students on scholarship at 80 different Texas colleges and universities representing a total value of over $47,000,000. In addition to ticket sales and various entry fees, etc., corporate sponsors contribute millions to ensure that the rodeo continues in its mission. The Houston Livestock Show and Rodeo is dedicated to improving the lives of the youth of Texas. With a total attendance for all 2018 rodeo events of 2,408,550, that mission is secure.

The extravaganza that we know today began as a much smaller ambition and with a slightly different name, the Houston Fat Stock Show and Livestock Exhibition. In 1931, seven men met with the goal of preserving the cattle industry along the Texas Gulf Coast. The next year, the first show took place in the huge old wooden Sam Houston Hall on Bagby Street and offered visitors free barbecue after 6:00 p.m. It drew an attendance of 2000 over a five day period. The Grand Champion Steer sold for $504. The show operated at a loss of $2,800. Considering it was the height of the Great Depression, the organizers could be forgiven for not continuing, but they were not dissuaded.

During the first years of its existence, the Fat Stock Show, as it was known for short, bore little resemblance to its present day descendent. While there were trick horse and bucking bronc entertainments, there was no official rodeo until several years after the show’s founding. In the time between, the quality and quantity of the livestock exhibited and judged grew and horse shows were added. 1938 saw the Fat Stock Show move into the new, air conditioned Sam Houston Coliseum. Bands playing western swing entertained the growing number of attendees while some important firsts were added.

The first rodeo parade hits the streets with local and state officials, a mounted police escort, and marching bands including the all-girl drum and bugle corps from Sam Houston High School, the only such group to have performed under the baton of John Phillip Sousa. The highlight of that year’s Fat Stock Show was the addition of a rodeo. Top hands from as far away as California and Calgary competed in five categories: bareback bronc riding, saddle bronc riding, bull riding, steer wrestling, and calf roping.  In later years, barrel racing and team roping were added. By all accounts, these additions were a great success.

Native Texan Gene Autry initiated country music star performances in 1942. Also begun in the 1940’s was the event that allows students a chance to win an animal to raise for showing, the calf scramble. Winners of an animal to raise must catch a calf, put a halter on it, and bring it into a defined square. In the true spirit of competition, not every kid is successful, but those who do not catch a calf have no problem helping their peers who are struggling to succeed. It is very uplifting to see the camaraderie and compassion displayed by these young competitors. The 1950’s saw the introduction of “Go Texan Days.” When we moved to Houston in 1975,  schools still celebrated Go Texan Day by canceling classes so that their students could go to the rodeo parade.

Since it’s inception, the Houston Livestock Show and Rodeo has continued to grow into the dynamic celebration of Texas heritage that we have today. In later years, special designated days have been named to recognize the varied cultures and groups that have contributed to Texas heritage including Go Tejano Day, Military Day, Black Heritage Day, etc. The Houston Livestock Show and Rodeo is the world’s largest livestock show and the richest regular season Professional Rodeo Cowboys Association competition. Ninety-nine committees comprised of 34,000 volunteers keep it going strong in true Go Texan spirit.

Saddle up, party with your boots on!” 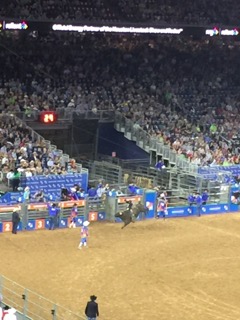 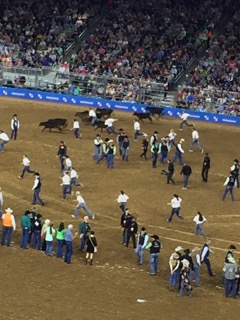 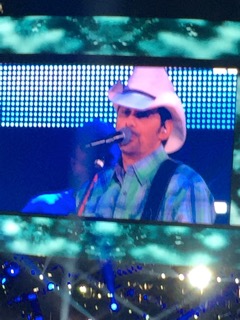