Relaxing, slow, refreshing… What words do you think of when you hear the word cruise? River cruises have become particularly attractive, and in spite of worldwide unrest. How about challenging and adventurous? That would depend on which river and when you sailed. Nile cruises continue to fire the imagination and draw visitors, and the Nile could be both.

How do I know this? When I began researching details about cruising the Nile for a book set in the mid nineteenth century, I had to wade through dozens of current ads and reviews: “3 Nights, Aswan to Luxor,” “7 nights Cairo to Aswan,” “Guided excursions with an Egyptologist,” “See the great temple at Abu Simbel,” “Travel through history along the blue Nile…” I’m guessing by now visions of temples, pyramids, sphinxes, and hieroglyphics have begun to float through your brain. Go ahead, admit it.

Western travelers have been drawn to Egypt since Napoleon’s men reported its wonders in the 1790s. But when did tourism become an industry? Steamer services began in the 1870s, bringing with them the possibility of mass tourism, and Thomas Cook & Son began publishing their classic guides. Steamer travel cut the time from Cairo to Aswan by two- thirds, from a leisurely three-month sail to a trip of less than one month. 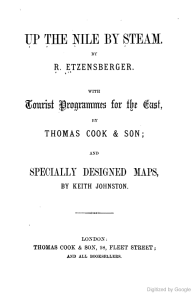 In Up the Nile By Steam, Etzensberger touts the advantages of steam travel over the traditional means of Nile travel be what he called “dahabeah,” the dahabiya, a boat with dramatic triangular sails. He describes the trials and tribulations of days and days of possibly unpleasant fellow travelers, or of becoming becalmed. He wrote,

Even the most enthusiastic admirer of this majestic river must confess that the scenery on its banks is very tame, and soon becomes monotonous. On board a fast sailing Steamer there is continual change and every turn brings new features, new sights in view.

In the mid-19th century, however, dahabiya would have been the only way to travel the Nile, and any adventurous soul who wished to see Abu Simbel or the temple complex of Karnak had to arrange for a dabahiya on his or her own, haggling with boat owners in Cairo. Still they came. I. Gardner Wilkinson published a guide for travel in the mid 1840s. Scholars and adventurers came in droves, often motivated by the drive for academic glory, desire to cart artifacts home to the expanding museums of Europe, or just plain greed.

The paintings of David Roberts, published as Egypt and Nubia, in Edinburgh between 1842 and 1849, undoubtedly fuel interest. Queen Victoria herself owned copy no. 1.

One notable female traveler, Sophia Lane Poole, took up residence in Cairo at the request of her brother Edward William Lane, an English orientalist scholar in order to expand his knowledge of the lives of women. Sophia appears to have gone upriver by dahabiya, but since she only describes a three-day voyage, she can’t have gone far; she is primarily interested in describing women of the villages along the banks. One suspects she sailed on a small instance of a dahabiya; she describes the challenges of that mode of travel:

Their great triangular sails are managed with extraordinary facility, which is an advantage of the utmost importance; for the sudden and frequent gusts of wind to which they are subject, require that a sail should be taken in almost in a moment, or the vessel would most probably be overset. On many occasions one side of our boat was completely under water, but the men are so skilful that an accident seldom happens, unless travellers pursue the voyage during the night. We ordered that our boat should not proceed at night, therefore we were three days on the Nile. 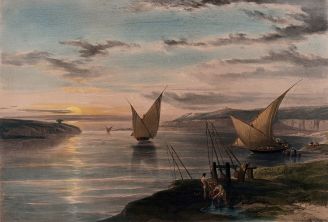 The boats were flat, shallow bottomed, and barge-like. Their primary purpose originally was to haul cargo but they could be fitted with box-like cabins above. Passengers could enjoy the view from the roof of the cabins, which could be fitted with railings, awnings, and furniture. Smaller and faster feluccas were also common on the Nile, and also possessed of the dramatic sails. They do not seem to have played a big role in tourism.

The weeks it took to sail to Thebes, Karnak, Abu Simbel and Aswan would have been leisurely if, as Etzensberger claimed, monotonous. But what if you wanted to continue past Aswan? Travel became significantly less peaceful upriver from Aswan when boats encountered the first cataract. It certainly wouldn’t have been boring. 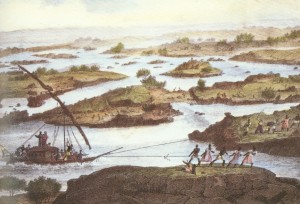 The Nile cataracts, rocky areas of rapids and falls, marked the remainder of the journey upriver. Between 1821 and 1885 the Ottoman overlords in Cairo incorporated much of what we now call Sudan into Egypt, with its capital at the newly created city of Khartoum. Locations were described by cataract. Meroë, capital of a Kush dynasty lay “beyond the fifth cataract,” whereas Napata, capital of the 25th Egyptian dynasty lay at the fourth. Khartoum itself lay beyond the sixth at the junction of the White Nile and Blue Nile

Historically, Sudan (also called Nubia and the Kingdom of Kush) and Egypt had been united before. Pharaohs incorporated the Kingdom of Kush, parts of Sudan, into Egypt sometime between the 12th and 16th centuries BC. Kush itself conquered and ruled Egypt in the 8th century BC and put the capital of Egypt at Napata. Scholars yearned to see those places, and so they pressed on past the cataracts.

Near the Fortress Ibrim in Nubia, David Roberts

To navigate the six cataracts, travelers were forced to get out of their boats to lighten them so they could be dragged over the rocks. The final part of the journey would have challenged the most dedicated traveler.

The majestic dahabiya still cruise the Nile (albeit sometimes augmented with engines) if you’ve a mind to try it. Cruises end, of course, at Aswan, politics and the great dam making it difficult to continue on into the land of Kush.

“What are the Cataracts of the Nile?” on wiseGeek, https://www.wisegeek.com/what-are-the-cataracts-of-the-nile.htm  Accessed March 1, 2019

Caroline Warfield is a writer of family-centered romance set in the Regency and Victorian eras who sits in an office surrounded by windows and occasionally travels to fire her imagination. She is currently writing The Seekers, a romance involving an French woman who is a healer or hakima, an Englishman determined that his glory lies in Nubia, and the conflicts between Egypt and the Ottoman Empire in the late 1938-1841.  You can find her here:

← President’s Day
Party with Your Boots On!! →

3 thoughts on “Cruising the Nile”