While most of North America is locked in winter’s grip, with temperatures at record lows for days on end, it’s time to consider what these conditions would be like without the benefits of advance knowledge of conditions, without a consistent source of heat for the home, without a grocery store to provide fresh food. What must life have been like before the Weather Channel’s existence?  Had these record low temperatures ever existed before?

Anonymous 18th century painting of Milan during the big freeze

Turns out, what most of America and Canada are currently experiencing is nothing compared to the great freeze that overtook Europe in 1709. From January to April of that year, Europe froze and stayed that way. Canals froze over, the Baltic Sea could be crossed on horseback. For four long months, people could travel on foot from Denmark to Sweden or Norway. The cold snap covered the continent from England to Russia, from Italy to Scandinavia. It was the worst winter in over 500 years and its toll on the continent was immeasurable. There had been no advance warning of the impending catastrophe, so no plans were in place, other than to live through it as best as one could.

The great freeze interrupted several wars that were taking place on the continent at the time. The Swedish troops involved in the invasion of Russia during the Great Northern War suffered mightedly, losing 2,000 troops in one night away from camp.

Lives were lost, people were breaking expensive pieces of furniture in order to burn anything they could to gain some heat, and wars were interrupted. In what became known as “Le Grand Hiver,” French people and livestock froze before any help could get to them. Roads into France were impassable, and in the three months Paris was cut off from supplies, untold numbers of people succumbed to the cold, either dying from hypothermia or starvation. If people had food stored away, it was unusable, as bread, meat and cheese froze solid. Even alcohol froze, rendering it useless. Everything was covered in a sheet of ice. The soil froze at least three feet deep.

The climatic crisis affected both rich and poor equally. Palaces and castles were drafty even in summer, much less in the icy grip of a winter such as this. In Versailles, the Duchess of Orleans, sister-in-law of King Louis XIV, tried to pen a letter: “The cold here is so fierce that it fairly defies description. I am sitting by a roaring fire, have a screen before the door, which is closed, so that I can sit here with a fur around my neck and my feet in a bearskin sack, and I am still shivering and can barely hold the pen. Never in my life have I seen a winter such as this one, which freezes the wine in bottles.” 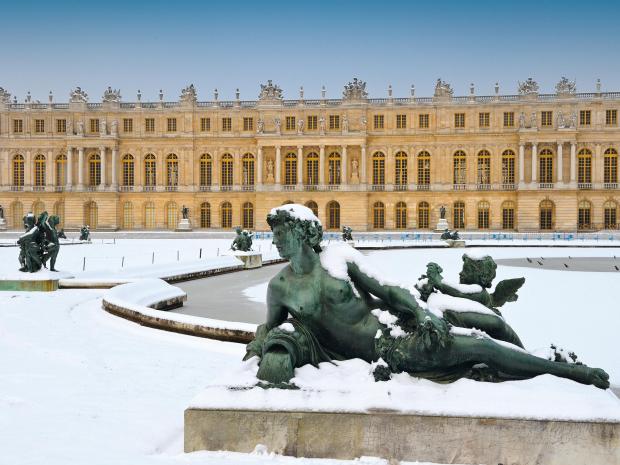 The palace of Versailles during a wintery blast

It was not only food and folks that were affected by the weather. Tree trunks shattered, as if they were made of glass rather than solid wood. Church bells fractured when people tried to ring them. The great freeze left ships stranded at sea, their crews perishing from the temperatures or from hunger. Rome and Florence were cut off by heavy snowfall.

“Travelers died in the countryside, livestock in the stables, wild animals in the woods; nearly all the birds died, wine froze in barrels and public fires were lit to warm the poor,” reads a canon from Beaune, in Burgundy, France.

When the icy fingers of winters finally loosened their grip on Europe in April, 1709, their woes were not at an end. Major flooding followed, and a pandemic of influenza further decimated those fortunate enough to have survived the deep freeze. Food was in short supply, since all the stores that had been set aside were ruined, and crops planted the previous fall were decimated. Populations dropped, especially in France, which was one of the hardest hit countries. The hard winter, combined with the subsequent famine, caused a decline in France’s population by 600,000.

Various theories have been put forth to explain this weather phenomenon, but the true cause will remain a mystery.

Becky Lower left her home state of Ohio last year, just in time to avoid the deep freeze currently being experienced by its residents. She now resides in North Carolina, which hit a balmy 27 degrees this morning. Huddled over her computer, she is counting her blessings that her work can go with her anywhere.

← The Bishop’s Palace: the American Castle that Survived a Killer
Diversity in Canada, A Second Look →

4 thoughts on “The Big Chill”