Typical “Powder Monkey” aboard a US ship during the Civil War

While romance readers love stories about the goings-on of the aristocrats of the British Empire, it should be noted that the aristocracy comprised only about 15% of the total population. While industry was becoming commonplace during the Regency and Victorian eras, adding a “working class” to the population, there was another class, an “under class,” submerged in poverty. It was this segment of the population that was most susceptible to exploitation.

The “under class” lived in deplorable conditions. Sometimes an entire family lived in one room, in order to keep a roof over their heads. Food was in short supply, usually just bread and potatoes, and children were not sent to school. Instead, they were forced to work as soon as they were able in order to augment the meager incomes of the heads of the households. Often, this meant that young children, not yet in their teens, had to leave their homes to find work. One of the industries that offered employment for young boys was the British Royal Navy, who worked aboard ship in the most terrifying job of all.

During the Age of Sail, roughly 1571-1862, when most ships were powered by the wind, cannons were a necessary part of a ship’s life, whether they were involved in international trade or as part of Britain’s navy. These boys, typically from poor working class stock, were used because their small size allowed them to move more easily in the limited space aboard ship between decks. Sometimes the role was filled by women or older men, but for the most part, the duty was given to a lad between twelve and fourteen years of age. “Powder Monkey” was the moniker used to describe these young boys who had the hazardous duty of running from the powder magazine to the cannons with a load of highly flammable gunpowder strapped to their backs, dodging gunfire from enemy ships while doing so.

In exchange for their service in the Royal Navy, these boys were not given a salary, merely a bed, some clothing, and a rudimentary education. They were recruited in part by the Marine Society, who sent five to six hundred of these boys each year to the British Naval fleet. These boys joined the navy because their parents could not afford to raise them, and it provided a sense of adventure, which appealed to many a young boy. Given little choice, these boys became part of the mighty British navy, handed the most dangerous of all jobs aboard ship, and were given the degrading name of “powder monkey.” On board a typical ship, such as the HMS Victory, there were 31 such boys out of the total crew of over 800 men.

Britain wasn’t the only one to use powder monkeys. When the United States established their navy in the late 1700s, it followed the formula used by the mighty British fleets and added powder monkeys as a vital part of the crew. They would not only carry the powder on their backs, but would bear the responsibility of

The use of children to accomplish the dangerous task of moving gunpowder during battle thankfully went out of favor before the War of 1812, due to humanitarian outcries as well as advances in warfare. But the practice continued until the 1920s. 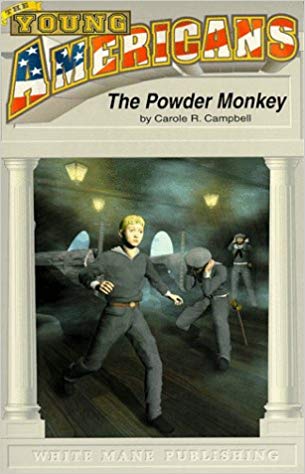 Today, as part of the Young American series of books for children, a youngster can read about life as a powder monkey, or take a tour aboard a ship to have the full experience of what life as a powder monkey was all about. The sheer terror these young children must have felt during the battles is glossed over during these tours and readings, promoting the big adventure instead.

Although Becky Lower loves the salt water pool at her health club, she admits to having feelings of sheer terror about being in the middle of a vast ocean. But, she’ll write about it, and develop a female character who is much braver than she is. Visit her website at http://www.beckylowerauthor.com to keep up with her latest goings-on.

6 thoughts on “The Powder Monkey”