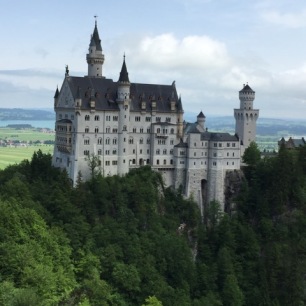 The word castle usually engenders images of European historical structures designed for military defense or to house nobility and royalty, places like mad King Ludwig II’s Neuschwanstein in Bavaria and England’s Warwick Castle. While late to the grand building party, in fact centuries late, America has a few castles of its own. Some were built with a historical European esthetic, others present something entirely new and American. Biltmore Estate in Asheville, North Carolina is one such castle. 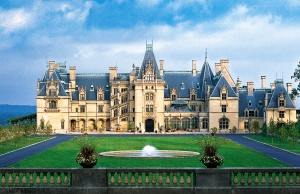 Built in the French Renaissance style, Biltmore House’s 135,000 square feet contain 35 bedrooms, 43 bathrooms, ball rooms, a banquet hall, 65 fireplaces, a bowling alley, an indoor pool, and copious servants’ quarters among other amenities all spread over four floors. Currently, the estate in the heart of the Appalachian Mountains is comprised of the house with over four acres of floor space, expansive gardens, and farms spread over 8,000 acres. It is the largest residence in the United States.

Creating a house and estate of these proportions required wealth beyond the wildest imaginings of ordinary mountaineers living as they did in a region renowned for its great natural beauty and its deep and abiding poverty. Luckily for George Washington Vanderbilt, grandson of  steamship and railroad magnet Commodore Cornelius Vanderbilt, there was plenty of available cash to fund his dream of a European style palace in the Blue Ridge Mountains. When the Commodore died in 1877, he left an estate worth more than $100 million, well over $2 billion today. It was the Gilded Age (late 1860’s-about 1900) and excess was a way of life for a very privileged few.

George Vanderbilt was only 25 when he set on the course that would bring his vision of a grand mountain summer estate to fruition. A railroad had been completed through the Blue Ridge Mountains in the early 1880’s and brought with it tourists and those seeking a mild summer climate away from the heat and disease of the lowlands. George and his mother visited Asheville for both the beauty of its surroundings and for the climate that they felt would be kinder to her chronic malaria and alleviate his fear of tuberculosis. In 1888 while riding on horseback through the area with his friend Charles McNamee, Vanderbilt fell in love with a tract of land surrounded by mountains, but he wanted more land than just the building site to create his estate. To this end, Vanderbilt hired McNamee to act as his land agent. McNamee began acquisitions in the summer of 1888 with 2000 acres, a process that eventually saw Vanderbilt buying up around 700 parcels including wilderness forest, 50 small farms, and 5 cemeteries. According to McNamee, many of the original property owners were very happy to sell out and leave their shabby log cabins behind. In addition, some of the land was not in the best of conditions due to poor farming practices. By George’s death in 1914, the estate was comprised of 125,000 acres of prime rehabilitated mountain property, including Mount Pisgah, now part of Pisgah National Forest. 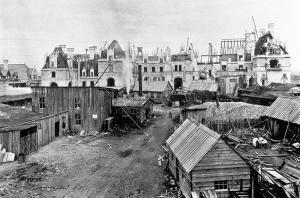 Bringing George’s vision to life required skills far beyond any he possessed. To build his dream house, he hired the preeminent architect of the day, his friend Richard Morris Hunt. Construction began in 1889 and required armies of craftsmen and builders, many of whom who lived on site in purpose built cabins. With the house begun, George had a rail branch built to bring family and guests to the edge of the property. From the depot, they would be transported by carriage and automobile over the long winding driveway. Later, a small lane of stone cottages and shops after the style of an English estate village was constructed to house estate workers. After six years, construction was not finished, but enough of the house was ready to enable George to open the beautifully decorated mansion to his friends and family for Christmas Eve, 1895. Construction would continue for years thereafter. After completion, the house contains over 11 million bricks, has a 102 step stone staircase rising four stories, and a huge iron chandelier suspended from a single point that illuminates the main entry with 72 electric lights. When George married American Edith Stuyvesant Dresser (1873–1958) in 1898 in Paris, he brought his bride home to live at Biltmore House where their only child, Cornelia, was born in 1900.

Such a magnificent structure required grounds equal in planning and beauty, so Vanderbilt hired America’s most famous landscape architect, Frederick Law Olmsted, creator of Central Park and father of American landscape design. Both formal and informal gardens were created to complement the house and the surrounding topography. The gardens and farms established by George and Olmsted continue to flourish today.

Biltmore House alone would be enough to make it stand out among America’s great houses, but its interiors contain furniture and artwork just as memorable. While the house was being constructed, architect Hunt and George traveled Europe and the Orient seeking treasures to fill the rooms and line the walls of the mansion. The collection remains intact and can be seen when one tours the house. Romantic Asheville (https://www.romanticasheville.com/biltmorececil.htm)  describes the collection thusly:

Inside, artworks by Renoir, Sargent, Whistler, Pellegrini and Boldini adorn the walls and, in one case, the ceiling. The furniture includes designs by Sheraton and Chippendale. A chess set and gaming table, which belonged to Napoleon when he was in exile at St. Helena, are on display in the salon, and Chinese goldfish bowls from the Ming Dynasty can be admired in the library. Eight 16th-century Flemish tapestries hang in the Banquet Hall and Tapestry Gallery. Fifty Persian and Oriental rugs cover marble and oak floors.

In my opinion, the most remarkable thing about Biltmore House and Estate is that it remains in the Vanderbilt family. It is a private residence as well as a major tourist attraction with portions open to the public for tours, like so many of its British and European peers.

Romantic Asheville describes the estate as it operates today.

The appraised value of the 135,000 square foot Biltmore House is about $37 million, according to Buncombe County tax appraisers in 2017. The value of the part of the estate that is open to the public with 2,194 acres, the House, hotels, restaurants, and other buildings exceed $300 million.

The estate is still family owned. George Vanderbilt’s great grandson, Bill Cecil Jr, is current CEO of Biltmore Company. His father (and George Vanderbilt’s grandson William Amherst Vanderbilt Cecil) was responsible for most of the dramatic growth of Biltmore. He died on October 31, 2017. His wife Mimi passed away just a few weeks later. In 1957, Cecil married Mary “Mimi” Ryan, a lawyer with a Wall Street firm. In 1960, they moved from New York to Asheville to focus on preserving Biltmore by including tourism. The number of employees at Biltmore has dramatically increased from 100 in the mid 1970s to 2,400 in 2017.

For information about visiting Asheville and touring Biltmore Estate: 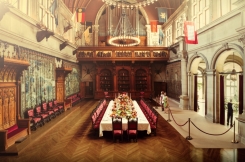 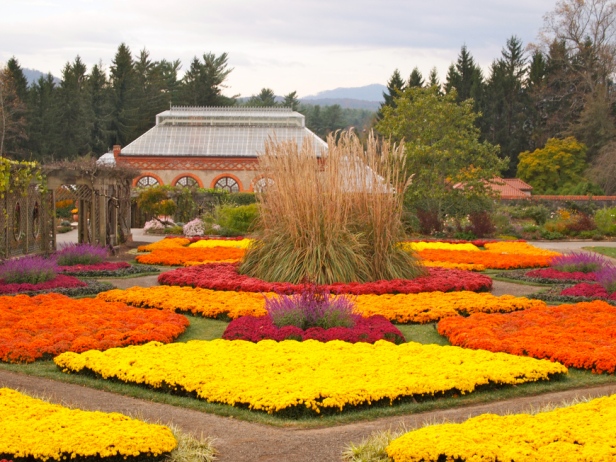 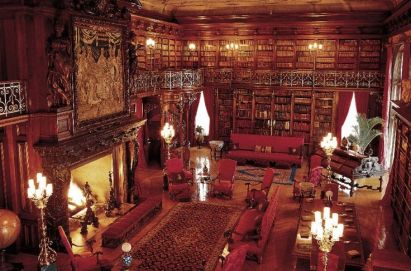 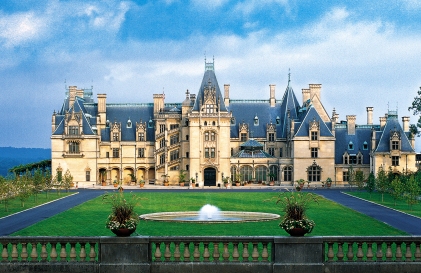 ← What is Real?
The Federation of Woman’s Exchanges →