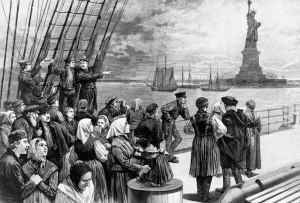 The United States is truly a nation of immigrants. To live in the New World is to ultimately have arrived from another shore. Geneticists and other scientists studying the human genome have shown that even our native peoples’ ancestors came from somewhere else, albeit many thousands of years before any Europeans. And the reason for all of this migration was no different millennia ago than it is today.

In the late 19th and early 20th centuries, immigrants boarded ships by the hundreds of thousands and endured the hardships of traveling in steerage all in the name of a better future. Italians, especially from the southern part of the boot, came in waves until by 1910, an estimated one-tenth of New York City’s population was made up of either newly arrived or first generation Italians. The majority were honest former farmers, craftsman, and unskilled labors. A much smaller number arrived with criminal pasts and no intentions of changing the manner in which they made their way in the world. These latter individuals would band together to first terrorize their neighbors in the Italian ghetto and later move throughout the city and over the whole country. Their crimes began with threats and extortion. Later, they would add loan-sharking, kidnapping, prostitution, drugs, alcohol, and murder to their repertoire.

The first known Sicilian Mafia member to reach the US is believed to have been Giuseppe Esposito. He arrived in New York with six criminal companions on the run from Italy where they were wanted for murder. Their list of victims included 11 wealthy landowners, and the chancellor and the vice chancellor of a Sicilian province. They were arrested in New Orleans in 1881 and extradited back to Italy. After these seven were deported, the next recognizable Mafia-style associates surfaced around 1900. Known as the Society of the Black Hand, they terrorized and extorted their fellow Italians, including opera star Enrico Caruso and wealthy Italian-American businessmen. The society’s name came from the calling card that accompanied their letters demanding protection money. Sometimes on the envelope, at other times on the doorpost, the victim would see a charcoal blackened handprint as a warning that failing to pay would have dire consequences. Their methods included kidnapping, murder, arson, and setting dynamite. Victims tended to pay.

Members of the Black Hand 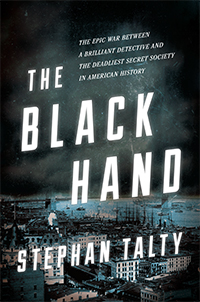 Success in extorting their fellow Italians prompted the Black Hand to spread their malevolence beyond the borders of Little Italy, moving on to native-born Americans. Their ambitions extended far up the social chain to John D. Rockefeller’s granddaughter, baseball player Frank Chance, and ironically, Daniel Wesson, owner of the gun manufacturing company Smith and Wesson. Luckily for New Yorkers, the Black Hand had an able nemesis in Italian immigrant and NYPD detective Joseph Petrosino whose exploits are recounted in Stephen Talty’s The Black Hand: the Epic War between a Brilliant Detective and Dealiest Secret Society in American History (Houghton Mifflin Harcourt, April 25, 2017). 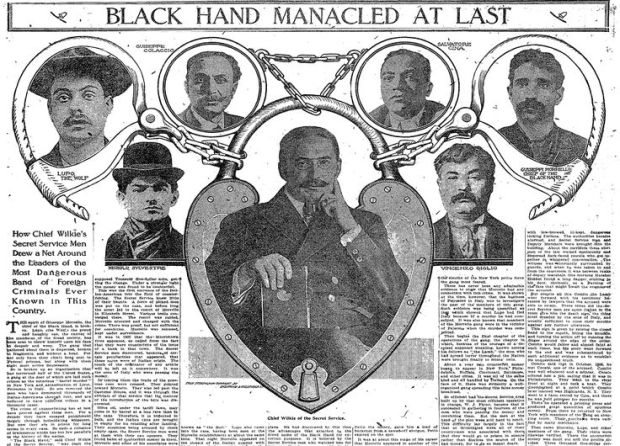 It was from organized criminal groups like the Black Hand that the American Mafia as we know it evolved. By the 1920’s, Prohibition gave rise to the nascent La Cosa Nosrta.

← The Appalachian Trail
The National Trails System in America →

7 thoughts on “History of American Crime: Coming to America”