The War of 1812 stands out in American history as a disappointment to most, a forgotten war as soon as one managed to finish 8th grade history class. It doesn’t have the same fervor as the Civil War, nor does it have the same righteous outcome as the Revolutionary War.

But June marked the anniversary of the start of the war, so now is a perfect time to open those history books again and explore what and why this war happened. It’s a bit confusing, involves Canada to some extent, the British, of course, and a lot of other elements that led to its inconclusive outcome. It gave rise to some commanding officers who later helped mold the country by taking the reins of the presidency–Andrew Jackson, William Henry Harrison and James Madison.

James Madison, president of the United States in 1812, who signed the document declaring war on Britain.

The United States suffered more casualties and deaths than did the British. 35,000 soldiers participated on behalf of America, leading to 2,200 deaths and 15,000 casualties. By contrast, the British had 48,000 soldiers in America, of which 1,600 died and 5,000 were injured.

Neither the United States nor the British in Canada were prepared for this war. The British were distracted by the war with France and saw this conflict as a distraction at best.

One might ask why the great Indian chief Tecumseh was involved, and why more than 10,000 Native Americans took part in this conflict. The British had convinced them that, if the British were victorious, they would set up a state in the uncharted Midwest as an Indian state. Canada also became involved in the war, since it was a colony of Britain and provided an easy place for America to strike back at the English. But the main reason the United States once again went to war with the mighty Brits was due to restriction of trade. At the time, the British were fighting a war against France. America traded with France, who depended on

these trade goods to prolong the war. If England could cut off the trade route, they’d shorten the conflict. But there were four distinct factions involved in the war on North American soil–British, American, Canadian and Native American–and they each saw the conflict from a different vantage point.

These Napoleanic Wars took precedence, so at the start of this war, the British were merely on the defensive. In actual fact, not many in the British Empire even knew there was another conflict going on in America, since they were involved in a fierce fight with France. Canada became involved since they feared a takeover by the United States. In fact, Thomas Jefferson wrote about how he’d like to acquire all of Canada for the United States and rid England of the continent altogether, so Canada had a right to worry. He was so confident this would be the outcome, he wrote to a friend:

The acquisition of Canada this year, as far as the neighborhood of Quebec, will be a mere matter of marching, and will give us experience for the attack of Halifax the next, and the final expulsion of England from the American continent.

The battle was fought on land and sea, which gave the U. S. an early advantage on the water, since their warships were much larger than the British frigates. However, the well-trained British foot soldiers outmatched the Americans on land. Skirmishes took place in both Canada and on the eastern seaboard. Buffalo, NY suffered the most damage of the American cities, being reduced to ruins.

In 1814, when the war with France ended, the British began attacking the United States with their full forces, burning the White House in August of that year. However, by this time, the Americans had become a force to be reckoned with and they won decisive victories at the Battle of Baltimore in 1814, when the American forces outlasted the British at Fort McHenry, inspiring Francis Scott Key to write the Star-Spangled Banner. and the Battle of New Orleans in 1815. Johnny Horton made the battle famous in song, which can be heard here:

Results of this conflict were minor. The British ceased impressing American sailors into the Royal Navy. Up to this point, thousands of US citizens were removed from American ships and made part of the British navy. The great Indian leader, Tecumseh, worked for the British during this war, which resulted in the end of his confederacy and his death at the Battle of the Thames in 1813, and the British no longer allowed for privateering. 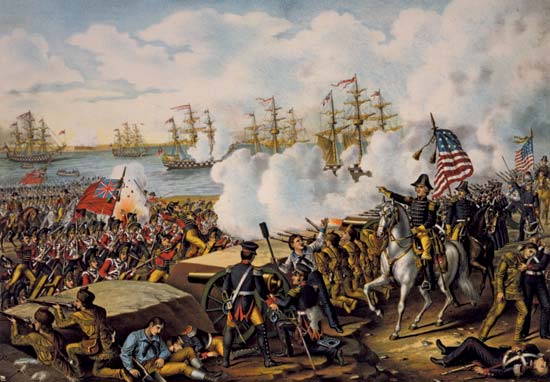 The Treaty of Ghent signaled a negotiated end to the conflict. Neither side lost any territory and the war was not considered a victory on either side. But it did prove once again that America was no longer a colony of the crown, and was its own separate country.