Republic of Florida – Who Knew? 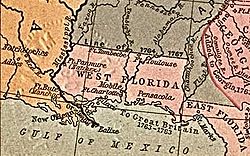 The romance and significance of the Republic of Texas is well known across the world. Cries of “Remember the Alamo” and “Come and Take It” have played out on screens both large and small and have been scrawled across the pages of historical novels and historical tomes alike. Residents of the Lone Star State are justifiably proud that their home has the singular distinction among US states of having entered the Union through treaty between two sovereign nations. What isn’t as well known is that another republic, predating Texas by some twenty-five years, was declared within the boundary of what is now the Lower Forty-Eight. At least one historian, William C. Davis writing in Smithsonian Magazine, deemed this little footnote of history to have been no less than the “template for Manifest Destiny.”[1]

I first came across this little kernel while driving between Houston and Mobile on Interstate 10. Somewhere near the Stennis Space Center in Mississippi, a highway sign simply stated “Republic of Florida, 1810” and nothing more. No arrows pointing toward an exit and museum, no historical marker, nothing to explain the cryptic inscription. Curiosity piqued, the hunt was on.

The Republic of West Florida came about after what has to be one of the shortest revolutions in history. On September 23, 1810, American soldiers led by Revolutionary War veteran Philemon Thomas marched into Fort San Carlos at Baton Rouge and fired one volley. The Spaniards who held claim to the territory surrendered. Thus ended the squabble over who owned what the Spaniards called West Florida, an area much greater in size than the Florida Panhandle of today which carries the same name. 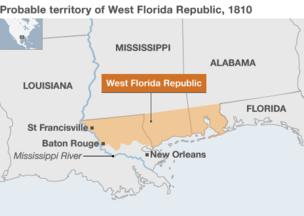 The problem of ownership arose when President Thomas Jefferson authorized the Louisiana Purchase, bringing under US control a very large portion of what is now the central part of the US. The American government believed it had bought everything from the Canadian border to the Gulf of Mexico. The Spanish begged to disagree. In all of the historical back and forth trading of the territory bordering the Gulf among Britain, France, and Spain, Spain believed that the long, narrow strip along the coast had not been ceded to Napoleon when they gave up the much vaster region that would become the Louisiana Purchase. They had no intention of giving away this toehold in eastern North America.

The story of how the US came to believe it had a right to invade Spain’s territory is not unlike the reasons for the Texas Revolution. It began with a clash of cultures and views on governance and political corruption. The Spanish governor of West Florida,Col. Charles Delassus, either failed to control or had no interest in controlling the officials below him whose inefficiency and corruption threatened the wellbeing of American settlers. The colonists made demands for reform with which Delassus pretended to go along. When his plan to arrest the leaders of the colonists was discovered, American soldiers were sent to settle the matter. The Spanish flag came down and a flag with a single white star on a field of blue went up. The new republic was not to last long. On December 10, 1810, the US flag was raised over all of the territory once known as West Florida.

While the Republic of West Florida was short-lived, I agree with William Davis. This first skirmish set the pattern for the Texas Revolution and the declaration of the California Republic. It took war with Mexico (1846-1847) to bring the matter to conclusion.

6 thoughts on “Republic of Florida – Who Knew?”