In a recent post, I posed a question that is central to this series: why is living history important? My initial answer dealt with the need to communicate the facts and concepts of history to those persons who have not previously connected with the past in a meaningful way. Knowing the history of one’s community, nation, and the world not only informs how we view those entities, but also impacts who we are as individuals and how we function within those entities. I strongly believe that individuals and nations cannot know where they are going unless they know where they have been. As the philosopher George Santayana so eloquently put it, “Those who cannot remember the past are condemned to repeat it.”

And then, of course, there is always the entertainment factor associated with living history events and attractions. They are great fun. They allow us to step back in time without the inconvenience of having to deal with the realities of historical living conditions. They allow us to witness or experience battles without loss of life or limb. They offer snapshots of who we once were. For some persons, though, they offer something much more important. Living history offers a connection to personal heritage.

In August of this year, my husband and I traveled into the mountains of Georgia and North Carolina, as we do most years, for a respite from the oppressive heat of summer in the American South. Although I didn’t grow up in the mountains, they have always called to me. They have always felt like home. Perhaps it is that my parents grew up in the foothills of the Appalachians in northern Georgia or that my fondest childhood memories center around family vacations in the Great Smokies and at my grandparents’ homes. Both sides of my family have lived in Cherokee County and Hall County, Georgia since the late 18th/early 19th centuries, and according to a deeply held family secret in my mother’s family, maybe much, much longer. Like many families whose roots are deep in the soil of the mountain South, my mother’s family is rumored to have Cherokee ancestry. I say rumored, because any proof of Native American heritage was buried long ago. Had it not been for my mother and her older sister, even the rumor would have been lost, for they alone of my grandparents’ five children seemed to know the story.

I have a theory, that I will never be able to prove, regarding the reason behind all the secrecy.  Most Americans have at least some knowledge of the Trail of Tears, subject of Becky Lower’s earlier post (here). What many are not aware of is just how assimilated into Anglo culture the Cherokee of northern Georgia were. Intermarriage was so common that many long-standing families in the region have at least some Native American ancestry. The Cherokee adopted Anglo ways and lived in homes indistinguishable from those of their Anglo neighbors. For example, in 1804, Chief James Vann built a lovely 2 1/2 story red brick Federal style home at Chatsworth, Georgia, a mansion by the standards of the 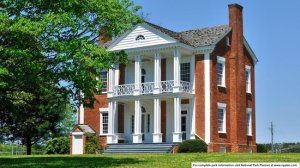 day, and lived his life as one of the wealthiest men in the Western Hemisphere (subject for a later post).[1] While there was an acknowledged prejudice against Native Americans, the ties between the Cherokee and many of their Anglo neighbors were strong, deeply interwoven, and common knowledge among the populous. The Cherokee and their Anglo neighbors for the most part lived in harmony and in an increasingly blended society. Then gold was discovered at Dahlonega. Greed ultimately determined the fate of Georgia’s Cherokee Nation.

By presidential decree, Federal troops were sent in 1838 to round up and remove the Cherokee and other tribes from their ancestral lands in Georgia. All persons openly claiming Cherokee heritage or “living as an Indian” were driven from their homes at bayonet point, moved to stockades, and finally force marched to what was then the Oklahoma Territory. In some cases, families were torn apart. One particularly poignant story from my father’s home town tells of how Waleska, Georgia got its name. White settlers began trickling into the mountains 60 miles or so north of what would become Atlanta during the 1820’s-early 1830’s. An early settler, Lewis E. Reinhardt, became friends with the local Cherokee chief. When the Trail of Tears began, the chief gave the keys to his house to Reinhardt, telling him that he would probably never come home again. Reinhardt then named the small community for the chief’s daughter, Warluskee, or Waleska as it is known today.

The period of removal was a frightening and humiliating time for the Cherokee of Georgia, made all the worse by the fact that they fought so hard in the courts to retain their land only to be tricked out of it by an illegitimate treaty. Understandably, the families who were able to hide their heritage, did so. I believe it was during this period that my mother’s family “lost” their Cherokee heritage. It became a secret, and once something is shrouded in secrecy, it can become a source of shame. So it was with my family.

I was a senior in high school when a friend commented on her Seminole heritage and said she could see Native American ancestry in my features. When I questioned my mother about the possibility of a Cherokee ancestor, she told me the story of a great grandmother who was a Cherokee. Maybe this explains why I always preferred playing the part of an Indian maiden in the school Thanksgiving plays. I found the Pilgrim costumes silly and felt embarrassed for the girls forced to wear them. I much preferred my pretend buckskins!

For those wanting to know more about Cherokee culture prior to the Trail of Tears, there is a wonderful living history museum in Cherokee, North Carolina. The museum and the very interesting actor I met there will be the subject of my next post, Living History: Connecting to Heritage, Part II.

For those wondering about why so many families have legends about Native American ancestry and take DNA tests that show none, please see this article on the validity of DNA testing for purposes of genealogy. History vs DNA testing

16 thoughts on “Living History: Connecting to Heritage, Part I”