Before the Zika crisis and before Ebola, West Nile Virus, or even Yellow Fever, mosquitoes brought Malaria. We just didn’t know it.

Malaria is an old scourge. Chinese writings as old as 2700 BC describe it. Hippocrates noted it. Ancient Sanskrit documents describe the disease and even speculate on insect bite as a cause. Romans not only knew of it, they associated it with swamps.

It has frequently entered literature as a sort of romantic fate. In Kingsolver’s The Poisonwood Bible, plot twists hinge on the disease’s debilitating characteristics. Conrad’s Marlowe in Heart of Darkness is usually assumed to be suffering from malaria, an external sign of internal corruption.

While such books portray it as a tropical disease, it was once indigenous to England, particularly in the coastal and estuarine marshlands in counties such as Kent, Sussex, and Essex. It has profound impact on population patters and the economy. People very early identified marshes as causes of disease, but the root cause, the ubiquitous mosquito remained a mystery.

When Europeans came to North America they either brought it with them, or found the disease lurking, but they still didn’t know what caused it. Malaria went by many names, It was called ague, bilious fever, country fever, intermittent fever, remittent fever, tertian fever, and mal aira, and it killed in large numbers. It has been estimated that fewer than 20% of children survived childhood in some areas with malaria as a contributing factor in the death rate. Where it didn’t kill outright, it debilitated. The recurrent fever characteristic of the disease, wore people down. 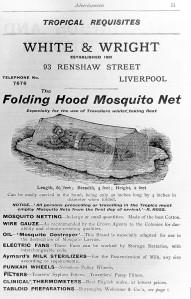 From R. Ross, Malarial fever, it’s cause, prevention and treatment, CC 4.0 via Wikimedia commons and the Welcome Trust

The largest clusters of malaria in English North American during the 18th century were in the low country of the Carolinas and Georgia. Some people viewed the entire area is deadly. The determining factor, however, wasn’t climate, but water. Marshes, swamps, floods, and hurricane driven rains all contributed. We now know, as they didn’t, that is because those conditions enable mosquitoes to thrive.

Because at least one form of malaria can hibernate in the liver, ready to feed a new generation of mosquitoes, it is temperature tolerant, and the marshlands of Upper Canada were ideal as well. It is possible that large numbers of loyalists flooding in from the southern colonies brought it with them. I came on this topic while researching the building of the Rideau Canal from what is now Ottawa to Kingston, Ontario. Criss-crossed with rivers and creeks, with abundant swampy land bred mosquitoes.

Reports from the Rideau show how devastating it can be. Over a thousand men died during the construction of the canal. Of these 5-600 were known to be from malaria. That doesn’t count the women and children who accompanied the workers or settlers nearby. In one small area, 1,316 me were working, 787 got sick and 27 died. In that same area the deaths of 13 women and 15 children were recorded. Even when not fatal, malaria debilitated. One outbreak in 1828 was so bad that, “…few could work with fever and ague; at Jones Falls and Kingston Mills, no one was able to carry a draught of water to a friend; doctors and all were laid down together.” (Watson “Rideau Myth-Conception”) 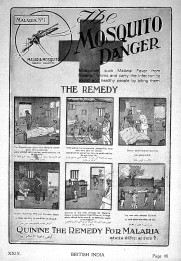 Remedies were known. The Chinese identified a plant they called Qinghao (annual or sweet wormwood) as effective in the second century BC. North American native peoples used the medicinal bark to treat the fever. Jesuit missionaries learned of it in the early 17th century and called it Peruvian Bark or Jesuit Bark. Quinine, the drug we still use today, is derived from the bark. The problem was that Jesuit Bark was not widely available. It certainly couldn’t be had in the Rideau watershed.

It wasn’t until the 1880s that the nature of the disease was correctly identified when Charles Louis Alphonse Laveran, a French army surgeon in Algeria noticed parasites in the blood steam of malaria sufferers. Unlike some of the other insect-borne diseases malaria is not a virus. It is in fact caused by a parasite, the life cycle of which accounts for the recurrent nature of untreated malaria. They are nasty buggers. This description of the life cycle graphically explains how it drives the disease:

The basic life cycle of the malaria parasite starts when a malaria-carrying mosquito bites a human. The parasites (as sporozoites) head to the liver and proceed to incubate. The sporozoites multiply and, when sufficient numbers are reached, head out to invade red blood cells and produce merozoites. These merozoites multiply and eventually burst the red blood cells, producing the classic chills and fever symptoms in the victim. It is at this stage that anopheles mosquitoes can pick up the parasites when taking blood from a human with the disease. Once back in the mosquito, the merozoites develop into male and female gametocytes. These gametocytes fuse in the mosquito’s gut (stomach) and produce sporozoites, which head into the mosquito’s salivary glands, ready to be injected into the next human victim, and the cycle starts all over again. 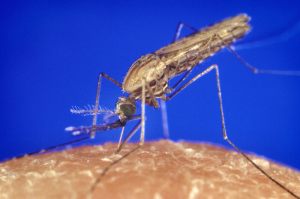 Twelve years later Ronald Ross, a British officer in the Indian Medical Service, demonstrated that malaria parasites were transmitted from infected patients to mosquitoes. He experimented with bird to insect to bird transmission. A team of Italian researchers led by Giovanni Batista Grassi demonstrated once and for all that the bite of the Anopheles mosquito caused malaria in 1899.

The first successful effort to bring malarial infection under control occurred during the building of the Panama canal. It took a combination of insect control and access to medication to bring that about, and it still does. In our era malaria continues to thrive in areas where there is inadequate mosquito control, and efforts to combat the disease include not only drugs including preventive treatment for pregnant women and children but also prevention in the form of indoor and outdoor spraying and insecticide infused mosquito netting in some areas.

Caroline Warfield lives in the urban wilds of Easter Pennsylvania where she spends time with her own hero and their grandson, enjoys the history all around her, and writes historical romance. The heroes and heroines of Caroline’s Dangerous Series overcame challenges even after their happy ending. Their children seek their own happiness in distant lands in Children of Empire. The first of the new series, The Renegade Wife, set in Upper Canada in 1832, comes out in October. Its sequel, The Reluctant Wife, set in India in 1835, will follow in April, 2017.

For novels featuring malaria see this list on Goodreads: https://www.goodreads.com/shelf/show/malaria

← The Real First Female to Run for President–Victoria Woodhull
Living History: Connecting to Heritage, Part I →