Travels Through Historical Fiction: Sands of the Namib

As the second of three posts set in Africa, we are traveling to Nambia’s Atlantic coast where an unexpected experience awaits. Leaving Windhoek, Nambia’s capital, we traveled west to Swakopmund, a resort town where you are transported to an earlier time when Nambia was an Imperial German colonial possession.

Swakopmund, founded in 1892 as the harbor for German Southwest Africa (brief history of Nambia here), lies approximately halfway between the desolate Skeleton Coast in northern Namibia and the diamond fields in the far south. The area came to the world’s notice most recently when Angelina Jolie and Brad Pitt decided their first biological child would be born there. Their reason for doing so remains a mystery, at least to me. It is a lovely area, but it is still Africa! On the other hand, it is as close a German experience as I have had outside of Germany itself and the Texas Hill Country’s German Belt. While English is the official national language, one hears German on the streets and in the shops as a portion of the population still speaks it at home and German tourists still travel there for the beaches.

Swakopmund’s German colonial architecture has been preserved with its original European flavor. One can order that most traditional of German fare, schnitzel, in many of the restaurants.

When we first moved to Texas and discovered the state’s second national food, chicken fried steak (barbecue being the first), I wondered how it had come into being. Wiener Schnitzel answered the question – at least that’s my theory. Texas has a large number of persons of German descendent and has experienced the same influence in food and architecture that I found in Namibia. Once again, I felt as though I could have been in my home state. The food and the beaches felt very familiar. 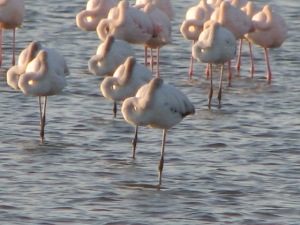 A short drive south of Swakopmund lies Walvis Bay, a former British possession. Walvis Bay is home to a deep harbor where a flock of flamingoes make their home, providing a touch of the exotic for tourists and residents. The town also boasts a significant salt industry, a guano collection industry, tourism industry, beach condos, and some of the tallest sand dunes in the world. The Nambian Desert literally spills into the Atlantic where the dunes are at their tallest. Riding in a Gator down from the top of a 980 foot tall dune is exhilarating, especially when the grade is so steep that the vehicle’s nose disappears.

Where the Namib Desert’s giant sand dunes meet the Atlantic.

South of Walvis Bay and its gigantic sand dunes one finds vast stretches of desert that lead one to ghost towns left on the edges of Nambia’s diamond industry.

…Lüderitz (in the former German colony of Deutsch-Südwestafrika – German South West Africa) is among Namibia’s most famous diamond sites. In 1907, the Germen {sic} railroad worker, August Stauch, heard that there may be diamonds in the area and he asked railroad laborers to keep an eye out for sparkling stones along the railroads in the region.

One of the laborers, who previously worked at the Kimberley diamond mine, found a diamond.  Stauch resigned from his job with the railroad company and launched a systematic search for diamonds. In 1908, after finding several stones that were confirmed being diamonds, a major rush for diamonds began.

The authorities established the Sperrgebiet (Prohibited Area), limiting entry to the entire region to licensed miners, prospectors and their laborers. This diamond mining area, located in the Namib Desert of southwestern Namibia…covers an area of 26,000 square km…

In 1914, as WWI erupted and…diamond mining was halted for nearly a year, until South African forces conquered the region, ending the German rule over Southwestern Africa. In 1920, Ernest Oppenheimer consolidated the region’s pre-war diamond mining companies into a single entity called the Consolidated Diamond Mines of South West Africa, later to be renamed CDM, which became part of De Beers.

In 1923, CDM was awarded the exclusive right to mine diamonds in Sperrgebiet…

During the 1940s… CDM relocated its headquarters to the newly formed town of Oranjemund {on the coast}. 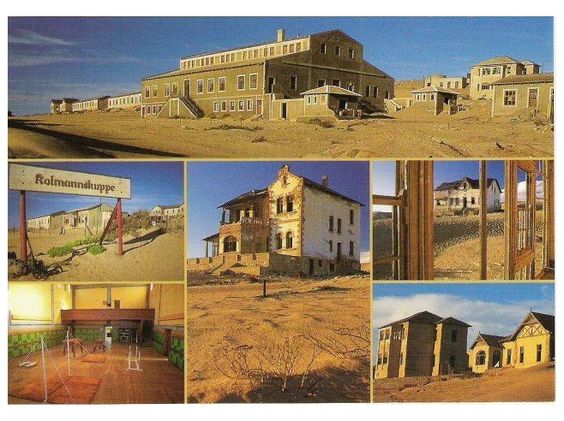 Lüderitz is currently a town that mostly benefits from tourism to the ghost towns left behind in the desert.[1]

On the opposite end of the Nambian coast lies a dangerous and fascinating place, The Skeleton Coast, so called for the many ship wrecks and tragic deaths that have occurred there. It is a land noted for its desolation and stark beauty. At one time, the entire Namibian coast was referred to as the Skeleton Coast, but today, it is Skeleton Coast National Park that bears the morbid moniker and for good reason. The skeletons of ships, animals, and humans litter its approximately 500 km length. If one chooses to travel within the park, one receives fair warning of what to expect at the park’s entrance gates. 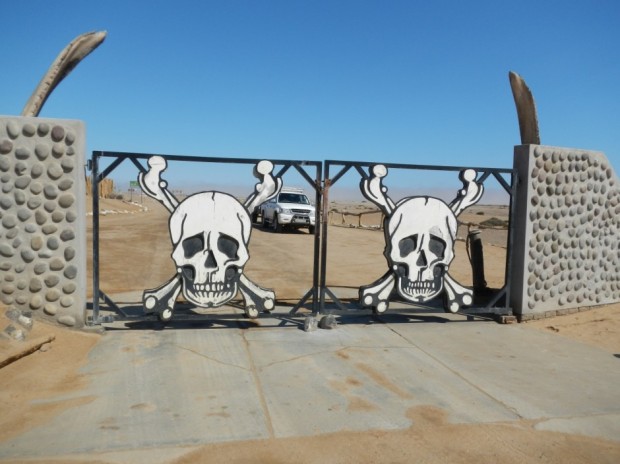 The Skeleton Coast is also home to the famous desert elephants of Nambia. While most elephants are known to be savannah dwelling vegetarians who enjoy water sports, these guys survive in an environment bereft of all that. They subsist on moisture laden vegetation growing in seasonal riverbeds and can go several days without water. Their bodies have adapted so that they have a lower body mass, longer legs, and larger feet than other elephants, all of which help them negotiate the dunes and desert terrain in which they live.

As mentioned in the first post about Namibia, works of historical fiction set in Namibia have not been located, so I will present two novels that represent Africa during WWII. 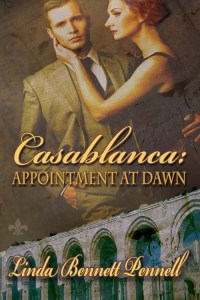 Casablanca, 1943: a viper’s nest of double agents and spies where OSS Officer Kurt Heinz finds his skill in covert operations pushed to the limit. Allied success in North Africa and the fate of the First Allied Conference—perhaps the outcome of the war—hang on Kurt’s next mission. The nature of his work makes relationships impossible. Nonetheless, he is increasingly torn between duty and the beautiful girl who desperately needs his protection and help.

Sarah Barrett, U.S. Army R.N., is finished with wartime romance. Determined to protect her recently broken heart, she throws all of her time and energy into caring for her patients, but when she is given a coded message by a mysterious dying civilian, she is sucked into a vortex of danger and intrigue that threatens her very survival. The one person who can help Sarah is Kurt, a man with too many secrets to be trusted. Amazon

All the treacherous intrigue of cosmopolitan Cairo and fiery drama of Rommel’s desert war in Africa continue the stirring historical adventure of the masterly Bartle Bull’s two previous novels, The White Rhino Hotel and A Cafe on the Nile. It is now 1942, and Nazi Germany stands at the height of its power. In North Africa the brilliant general Rommel’s panzers threaten the Suez Canal, the Middle East’s oil fields, and the trade route to Asia, but to win Egypt Rommel must first take the port of Tobruk and destroy the British fortress of Bir Hakeim. There, against the massive force of Rommel’s Afrika Korps, a young English hussar named Wellington Rider fights beside the French Foreign Legion. Wellington’s father, the professional hunter Anton Rider, is now operating as a desert commando and is engaged in the obliteration of Nazi air bases and petrol dumps. Not only has Anton’s old friend Ernst von Decken, a German soldier of fortune, meanwhile become the enemy, but also Anton’s estranged wife has entered into an affair with a Frenchman who supports Rommel’s campaign. Alliances shift, loyalties deceive, espionage thrives, and peril lies as much in the dark corners of Cairo as it does in the desert night.

July 9: Thanks to reader Mary Maxwell, I am able to add a historical novel set in Namibia!  Love it when readers help us discover new fiction!!

Centaine de Thiry grew up with privilege, wealth, and freedom on a sprawling French estate. Then war came crashing down around her, and a daring young South African aviator named Michael Courtney stole her heart amidst the destruction. But the tides of fate and battle sent the young woman on a journey across a dangerous sea to the coast of Africa.

When Centaine’s ship is torpedoed and sunk, she is plunged into a shark-filled sea miles from the unseen shore. And when she reaches land, Centaine puts foot not in the lush world that Michael Courtney described to her, but on the edge of a burning desert–alone and fighting for her life.

In a strange world, under a great rushing sky, Centaine sets forth in the company of wandering Bushmen―and then into the arms of a renegade white soldier who may be her savior or destruction. As Michael Courtney’s family searches for Centaine, she comes near her promised land–and the untold tragedy and riches that it holds… 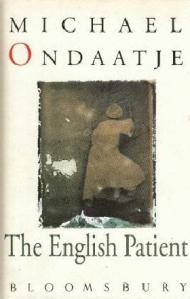 Thank you, Tema Merback for suggesting The English Patient. That is a great lead in to my next post, but we will have to wait until July 29 to see the tie-in.

1896: Four Englishmen flee for their lives across the merciless Kalahari Desert, carrying a stolen fortune in raw diamonds, and hunted by a fierce African tribe. The thieves manage to reach the waiting HMS Rove – only to die with their pursuers in a vicious storm that buries them all under tons of sand . . .

The present day: Juan Cabrillo and the crew of the covert combat ship Oregon have barely escaped a mission on the Congo River when they intercept a mayday from a defenceless boat under fire off the African coast. Cabrillo takes action, saving the beautiful Sloane Macintyre – who’s looking for a long-submerged ship that may hold a fortune in diamonds. But what surprises Cabrillo is her story about a crazy fisherman who claims to have been attacked in the same area on the open sea by giant metal snakes.

What begins as a snake hunt leads Cabrillo on to the trail of a far more lethal quarry – a deranged militant and his followers who plan to unleash the devastating power of nature itself against all who oppose them.

← Cadillac, Pontiac, Ford, and My Hometown
Daughters of the American Revolution →

5 thoughts on “Travels Through Historical Fiction: Sands of the Namib”