Of Popes and Politics 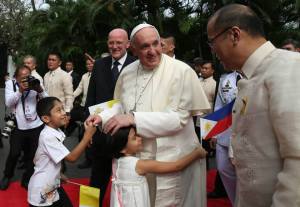 Pope Francis in the Philippines, 2015

As I write this, Pope Francis has arrived here in Philadelphia and my city has gone mad with joy. It seems as if the whole city has poured downtown to greet him. I find it stunning that the holder of so ancient a title, and a religious one at that can engender that much excitement. Popes have varied in how much power they held and how much influence they wielded. In our secular age the current incumbent has little of the former, but he seems to wield quite a bit of the latter if the crowds any criteria by which to judge.

If, as they say, power corrupts, that is perhaps a good thing. The long history of the papacy is fraught with scoundrels, saints, corruption, idealism, reactionary thinking, and reformers. Its history is almost impossible to research because so little of what is written or recorded is objective. Pope Francis’s own life history comes with political baggage and partisan rhetoric, and yet his persona is one of openness and humility that draws people to him. 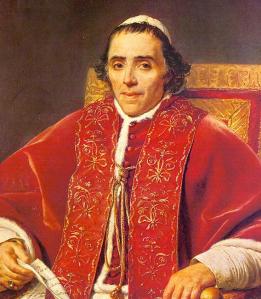 It made me think of another such man. Like the current pope, Pius VII also lived in a time of great political change and upheaval that threatened to spill over into the church. He also had admirers and detracters. He also belonged to a religious order, and he was also, by most accounts, a humble man of the people.

Born Barnaba Chiaramonti in 1742 in the Romagna region of Italy, he attended university in Ravenna before becoming a Benedictine monk. His family was of minor nobility and not wealthy. He spent his first seventeen years in the order as a teacher. He was, however, distantly related to Pope Pius VI, a fact that propelled him into a church career, a fact that did not endear him to his fellow Benedictines. He eventually rose to the role of cardinal.

These were the years of the Enlightenment, the movement that bore fruit in the American Revolution. Democracy was not a given, and monarchists ruled from Ireland to the Urals. The French Revolution with its class warfare, anti-clerical persecution, and Terror horrified much of Europe and all of the Church. Napoleon, dictator though he may have been, was a child of the revolution and the enlightenment. Much of the hierarchy, particularly the Italian hierarchy, took a reactionary stand against change.

Chiaramonti, however, recommended cooperation with the Cisalpine republican government put in place by Napoleon. He famously asserted that there was no conflict between democracy and the church and that “Christian virtue makes men good democrats…. Equality is not an idea of philosophers but of Christ…and do not believe that the Catholic religion is against democracy.” While the forces of revolution and reaction swirled around him, he held to this middle ground for the rest of his life.

Pius VI, by contrast, vociferously condemned the French Revolution and particularly the suppression—and persecution—of the church in France. When the French invaded Italy he was forced from the Papal States and died in exile. The very concept of the papacy as a country with a monarch and standing army was rejected by many.

In this atmosphere, cardinals met in a Benedictine monastery in Venice, by then under Austrian rule, to elect a new pope. The Austrians blocked some of the candidates brought forward. Others failed to attract votes. Chiaramonti, clearly not a favorite of anti-revolution hard liners, was elected as a compromise and become Pius VII. At least one cardinal, a supporter of the condemned ultra strict Jansenist movement, refused him obedience for five years. One wonders to what extent his personal attraction played a role, or whether he was viewed as too weak to cause trouble. 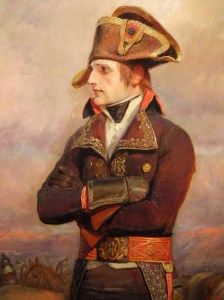 Bonaparte During the First Italian Campaign, by Edouard Detaille

In any case, from the time of his election in 1800 to the fall of Napoleon in 1815, his reign was absorbed by politics. His attempts to compromise with Napoleon, notably the Concordat of 1801 with its declarations regarding freedom for all religions and the rudiments of separation of church and state, failed. He witnessed Napoleon’s coronation as emperor in which Napoleon famously snatched the crown from the pope’s hands and crowned himself. Ultimately, France once again invaded the Papal States and carried Pius the VII into exile where he lived under harsh conditions in semi-isolation.

After Napoleon’s exile, Pius VII sent representatives to the Congress of Vienna, oversaw the restoration of papal lands with some concessions, and supported efforts to suppress the slave trade. He created the first diocese in the United States and appointed John Carroll, its bishop. He eventually created several dioceses including Philadelphia, which has welcomed visits from two of his successors.

With characteristic compassion, he offered sanctuary to his old enemy Napoleon’s mother and sister in later years. The emperor in exile who had once called him “the old priest,” is supposed to have said in the end that he was, “an old man full of tolerance and light.”

In an era in which we like to put public officials in boxes labeled “Liberal” or “Conservative” as code language for a whole range of opinions, Pius VII was neither. In some ways his administration was more enlightened than before but the Index and the Inquisition were revived after his return to power. He was perhaps more progressive than some who followed (Pius IX who clung to the political rights of the Vatican state) and less than others (Leo XIII who championed labor) in a time of European transition from the age of the absolute monarch to the age of republicanism.

If you look it isn’t hard to find wildly conflicting opinions about the man. Only recently the Catholic Church began the cause of canonization for this pope who died 192 years ago. His blend of humility, compassion, and simplicity mixed with courage and steadfastness baffled those who looked at the world through political eyes. That sort of person still does.  What makes a man holy never makes sense in a world that concerns itself primarily with power. 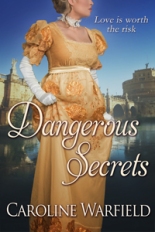 I became interested in Pius VII while researching my novel Dangerous Secrets, set in Rome in 1820. He intrigued me so much I took the liberty of portraying him as an old man going about in his Benedictine habit, to visit his cousin in the guise of a simple monk. I hope he didn’t mind

Jamie Heyworth fled to Rome and sits in despair with nothing left but secrets he harbors to protect his heart. Nora Haley fears deception will destroy everything she desires. Either one, however, will dare anything for a tiny girl in their care, even enter a sham marriage to protect her. Will love—and the truth—bind them both together?

The Pope Who Outlasted a Tyrant by  Matthew E. Bunson, retrieved from Catholic Answers Magazine on Oct. 1, 2015

2 thoughts on “Of Popes and Politics”