The Sons Of Liberty–A Band of Thugs, or The Loyal Nine? 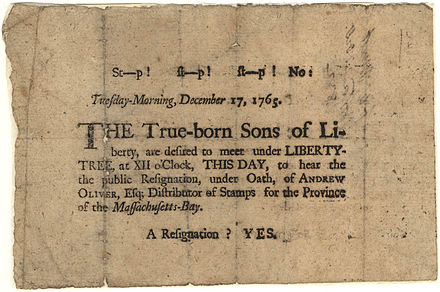 Due to a recent minor medical issue, I was sidelined for a few weeks. As a result, I watched a lot of television, including a marathon session of the Sons Of Liberty. If you’re not familiar with them, this was the name given to the band of men organized by Samuel Adams, in direct response to the passing of the Stamp Act in 1765. The Stamp Act enraged the colonists, and there were two bands formed to take action against the British. One was a group called The Loyal Nine, formed in utmost secrecy to demonstrate against the Act. The other was the Sons of Liberty, formed by Samuel Adams.

In both cases, the tactics used to protest were fear, intimidation and violence. They were responsible for the Boston Tea Party, which effectively began the Revolutionary War. Samuel Adams was not a member of the Loyal Nine, but is credited with being the founder and leader of the Sons of Liberty that the Loyal Nine eventually merged into. The Sons of Liberty, who were mostly smugglers and sailors, were the organizers of the Boston Tea Party, and evidence shows at least four of the Loyal Nine were involved in the planning of the Tea Party, and that perhaps as many as seven were active participants in the boarding of the ships and the destruction of the tea from the British East India Company.

The television mini-series depicted Samuel Adams as a rabble-rouser who had little faith in the Continental Congress. He was most comfortable in a tavern surrounded by his loyal men as they plotted their next course of action. What the series didn’t do well was give any kind of background as to who these men were. Whereas the members of the Continental Congress were well-portrayed–John Hancock, George Washington, Benjamin Franklin, Paul Revere, Thomas Paine and Thomas Jefferson, among others–there was no mention of The Loyal Nine.

After watching their actions in the series, I decided to find out more about them.

The Loyal Nine were comprised of: Benjamin Edes, the printer of the Boston Gazette, Henry Bass, who was a cousin of Samuel Adams and a merchant, John Avery and Thomas Chase were distillers, John Smith and Stephen Cleverly were braziers, craftsmen who worked with brass, Thomas Crafts was a painter and George Trott was a jeweler. There is some confusion over whether Henry Wells or Joseph Field was the ninth member of the Loyal Nine, although the Boston Tea Party website lists Wells. This much information is available on the internet, and in books, but it takes some digging to find out more.

Benjamin Edes, born in 1732, was an owner of the Boston Gazette. He fought British policy through newspaper articles on the Stamp Act, the tea tax, the Townshend Acts, and other measures of oppression the British attempted to impose on the colonists. During the Siege of Boston in 1775 and 1776, the opening of the Revolutionary War, Benjamin escaped to Watertown, MA, where he continued to publish the Gazette for many years. He died in 1803.

John Avery, in addition to being a distiller, was also the son-in-law to the Speaker of the Massachusetts House of Commons.

Thomas Crafts (1740-1799), friend of Paul Revere, he became a commander of the Massachusetts militia artillery during the war, and then rose to become a member of Boston’s new nobility afterwards. He continued to serve Boston as a selectman and Justice of the Peace for many years.

Henry Bass, born in 1739, was a successful Bostonian merchant and cousin to Samuel Adams. He died in 1813.

Thomas Chase, born in 1737, was a member of the Freemason lodge of Boston. He is speculated to have been among the first group to plan the Boston Tea Party and died in 1787.

Henry Wells served as a Captain in the Revolutionary Army and was a member of the Freemasons.

I could find no biographical information on Stephen Cleverly or John Smith.

What struck me as I was researching this is the young age of these men who changed our country. Samuel Adams was born in 1722, and was an elder statesman to the others, who ranged in age at the start of the Revolutionary War from 24 to 33. I wonder if Americans today would be willing to put their trust into the hands of a young band of visionaries.

8 thoughts on “The Sons Of Liberty–A Band of Thugs, or The Loyal Nine?”