155th Anniversary of the Pony Express

Since April is the anniversary of one of the most clever and romantic ideas from frontier times, I thought I’d share my notes on 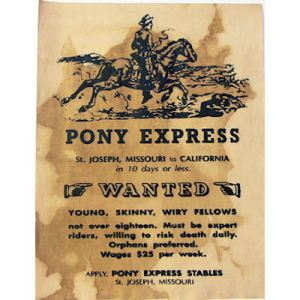 the significance of the Pony Express, which I uncovered while doing research for my latest novel, Expressly Yours, Samantha. Speaking of clever ideas, I hope everyone got to see the Google Doodle about the Pony Express last week. If not, you can view it here: https://www.google.com/doodles/155th-anniversary-of-the-pony-express

After reading the recruitment poster for the Pony Express riders, I couldn’t help but plan on having a book about them. Here were the qualifications: Young, skinny, wiry fellows, not over 18, must be expert riders, willing to face death daily. Orphans preferred. What writer wouldn’t want to use these colorful characters in their books?

The route for the riders was 1,966 miles long and stretched from St. Joseph, MO to San Francisco, CA. Its primary purpose was to open a northern route for correspondence to flow back and forth from the nation’s capital to the rich land known as California. In the event of a war, the North wanted California to side with it. The riders for the Pony Express were paid handsomely for the time–$100 a month. In exchange for the good paycheck, they would face wild animals, wicked weather, Indian war parties, and the occasional stray shot from a wagon train.

William Russell was the mastermind of the Pony Express. His belief that a central route could be established and carry the mail across the country in ten days led to the government taking a chance on him. In a matter of sixty-seven short days, he cobbled together a route running through Kansas, Nebraska, Colorado, Wyoming, Utah, Nevada, and California, consisting of seven different divisions. Each division employed seventy to eighty scrappy, tough, and small riders who were born to the saddle, were familiar with the countryside, and had nerves of steel. They would gallop back and forth between relay stations set up at regular intervals, where a change of horses would be accomplished.

Home stations were about eighty miles apart and signaled a change of rider as well as a change of horse. With remarkable speed, the route was laid out, relay stations constructed out of whatever material was av 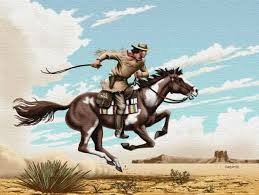 ailable when a house or an inn was not already available, and four hundred horses were spread out over the route. The first mail delivery run, heralded by parades and speeches on both ends of the country, took place April 3, 1860. Most of the horses used were wild mustangs, as tough as the territory they’d be crossing.

Telegraph lines were being set up along this route as well, and as quickly as it came into being, the Pony Express dissolved in October 1861, when the final leg of telegraph lines was installed. There was now a more efficient method to keep California in touch with the East Coast, and after only eighteen months in existence, the Pony Express became a romantic memory in American lore. http://amzn.to/1vZON5F

4 thoughts on “155th Anniversary of the Pony Express”