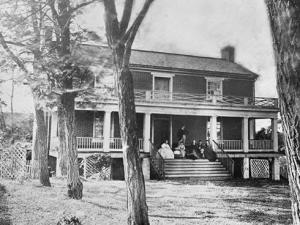 The McLean family on their front porch.

On Palm Sunday April 9, 1865, Confederate General Robert E. Lee surrendered to Union General Ulysses  S. Grant in the front parlor of the Wilmar McLean home at Appomattox Court House, Virginia, effectively bringing the bloodiest war in American history toward conclusion. In handing over his sword to his opponent, Lee also ended the Confederate States’ attempt at seceding from the Union and settled the arguments over states’ rights vs federal law and whether slavery would continue in the land of the free. At the time and to this day, the Union victory is one for which all Americans should be forever grateful. We are stronger as a whole than we could have ever been apart.

While most Americans recognize the importance of Appomattox Court House, the following are some facts that may not be as well known. 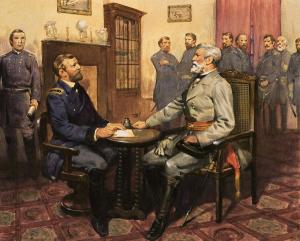 1. While Lee surrendered the Army of Northern Virginia, this did not end the war. Gen. Johnston’s Army of Tennessee did not surrender until April 26 when Johnston surrendered almost 90,000 men to William T. Sherman. Even so, minor battles and skirmishes continued to take place into May, mostly in the West. The final battle of the war was at Palmito Ranch in Texas. The last large Confederate force surrendered on June 2 at Galveston, Texas.

2. The victors’  actions at the surrender demonstrated the respect that existed between the former combatants. Soldiers on both sides laughed and cried upon learning that four years of hell had come to an end. On April 12 when the formal surrender of weapons and battle flags occurred, Union soldiers saluted the Confederates and there were many reports of kindness and friendliness between the former enemies.

3. In the week leading up to surrender, Lee had lost more than half his army to death and surrender to superior Union forces during the Siege of Petersburg and battles at Five Forks and Sailor’s Creek. Desertion was also a major problem. Confederate soldiers were poorly supplied and said to be on the verge of starving. Grant’s victory at the Battle of Appomattox Court House earlier on the morning of April 9 dealt the Army of Northern Virginia a final blow.

4. Discovering there was no escape, Lee chose to surrender his army rather than send troops in smaller bands to try to join Gen. Johnston’s Army of Tennessee in North Carolina as some of his officers suggested. He reasoned “…the men would be without rations and under no control of officers. They would be compelled to rob and steal in order to live. They would become mere bands of marauders… We would bring on a state of affairs it would take the country [the Confederate states] years to recover from.” He surrendered to prevent his army from inflicting additional pain and suffering on their fellow countrymen.

5. The Army of Northern Virginia was paroled rather than taken as prisoners. Grant allowed the Confederate soldiers to return home. He also let officers, cavalrymen, and artillerymen  keep their swords and horses if they agreed to stop fighting and abide by federal law. In addition, Grant supplied the Rebels with sorely needed rations.

6. Lee’s decision not to fight a guerrilla war and Grant’s leniency toward his former enemies are believed to be two contributing factors in the relative peace of Reconstruction.

7. A Native American drafted the surrender treaty. Grant’s personal secretary and friend, Lt. Col. Ely S. Parker, a Seneca Indian chief from New York, had studied law and was a natural choice for the task of drafting the terms of surrender. The two men met early on in their careers and became friends. After the Mexican-American War, Grant secured Parker’s army commission. Parker was with Grant at the signing of the terms of surrender which he had written.

8. In addition to wishing to spare the South further damage, it is suspected that family was also on Lee’s mind as he made his decision to surrender. His son, Maj. Gen. William Henry Fitzhugh “Rooney” Lee, commanded a calvary division during the last battle. His division was under the leadership of his cousin,  Maj. Gen. Fitzhugh Lee. In addition, both Lee’s eldest son, Maj. Gen. George Washington Custis Lee, and his youngest, Capt. Robert E. Lee, Jr., were missing in action. Both sons survived the war. 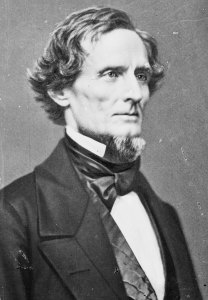 9. Confederate President Jefferson Davis was displeased with Lee’s surrender, but truly appalled by Johnston’s giving up virtually all Confederate forces in the Carolinas, Georgia, and Florida without being defeated by Sherman.

Today, McLean House stands as the centerpiece to a national historic park established in 1940. The park spreads across approximately 1700 acres that include parts of the battlefield, the courthouse, and Lee’s headquarters among other sites of importance.  Link for park information: http://www.nps.gov/apco/index.htm

← Waterloo Fact and Fiction
The Other Booths →