Pro-Union in a Confederate South

When I was a child in Georgia, voters were required to cast their ballots in the primary of the party in which they were registered. After accompanying my mother to the polls, I asked Mama why she voted in the Democratic Party’s primary. She laughed and replied, “Because I want to vote.”

In many counties throughout the South, this meant one registered as a Democrat because there simply was no Republican Party active in the area. My parents, our relatives, and every adult I knew were all registered Democrats. Mama went on to tell me that presidential candidates didn’t bother to campaign in the South because everyone knew that the South block voted for the Democratic Party. Such was the political climate in which I grew up.

One can imagine, then, my astonishment when I learned that my paternal grandfather had been a Republican. At this point, it is important to share that while he was my grandfather, he was born May 27, 1865. As my mother-in-law used to say, my family skips generations. Sadly, my grandfather died long before I was born. I would love to have known him for he was a rather fascinating figure despite his impoverished Appalachian upbringing. He came from a long line of subsistence farmers and could not possibly have had more than an eighth grade education before he felt a calling to help the people of his rural mountain home. He and his father borrowed enough money to get him started and off he went to college in Tennessee. After working his way through the University of Nashville and the Atlanta Medical College, now Emory University Medical College, he became a respected and beloved country doctor with a far ranging reputation as a skilled healer. He practiced medicine in rural northern Georgia during a time when the KKK marched openly with the enthusiastic support of many communities. He disdained the Democratic Party and voted Republican in every election. His neighbors overlooked his political leanings, I suspect, because he was so skilled in healing communicable diseases. So how was it that a son of the South diverged so widely from his neighbors in his politics? I suspect the answer lies in his place of birth. My grandfather was born in Pickens County, Georgia. 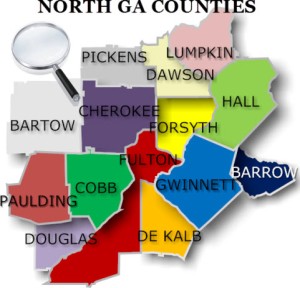 One of the most lasting cliches regarding the American Civil War is that it pitted neighbor against neighbor and brother against brother. Cliches exist, of course, because they are usually based on historical fact. In the case of extreme northern Georgia, the cliche was a particular and painful reality. Although the issue has received little attention in the grander scheme of Civil War history, the people of northern Georgia were very divided on the issue of secession. Counties like Cherokee were predominately pro-Confederate, but the contiguous Pickens County was such a stronghold of pro-Unionism that the Stars and Stripes flying over the county courthouse was guarded by some of the townspeople for one month after secession when the state government finally demanded its removal. While Pickens County sent men to fight on both sides of the conflict, county leaders were staunchly against secession.

Georgia’s mountain northern counties were so divided that the state formed impressment gangs to round up men refusing to fight. Later when these men deserted by the hundreds, the state created the dreaded Home Guards charged with obtaining draft animals and supplies for the Confederate army and dealing with deserters and draft evaders. The Home Guards were regarded by many simply as officially sanctioned thugs. Their methods included torture, executions without trials, and retaliations against families and friends of anyone thought to be pro-Union. Even Confederate families were not safe from their marauding. There are stories of Confederate soldiers deserting to go home and protect their own families from the Home Guards. 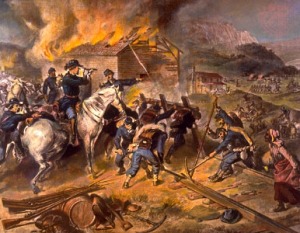 Sherman and troops burning a barn and tearing up tracks.

By 1864, Union General William T. Sherman had begun his famous March to the Sea. He found the pro-Union Southerners who evaded Confederate conscription and helped hide deserters were just as willing to act as spies and guides for Union troops. The march through Georgia contained a large unit from northern Alabama, who were very hard on their Confederate neighbors to the east. When the Georgia Home Guards retaliated by increasing their raids and executions, Sherman sent troops to Pickens County to rescue pro-Union families. He next set his eye on Canton, the Cherokee County seat and former home of Confederate Governor Joe Brown. The town was burned to the ground as retribution for Home Guard violence. After his victory at Atlanta, Sherman tasked officers with recruiting men and forming units like the Georgia First, USA comprised primarily of men from Pickens, Dawson, and Union Counties. These units served as guards for Sherman’s rail lines through Georgia. They also fought a guerrilla war against the Home Guards who had visited so much suffering on them and their families.

The hatred and violence did not end with Lee’s surrender at Appomattox. Long after hostilities ceased, families from both sides continued to kill and harm one another in retribution for what had been done during the war. As the Civil War generation passed into old age and their children and grandchildren grew to adulthood, the depth of the mountain South’s division over secession and the war faded from memory. By the time my generation came along, it was wholly forgotten by ordinary Southerners. It was assumed that anyone whose family lived in Georgia in the Nineteenth Century had been Confederate.

Research into family history led me to the rosters of the Georgia First, USA where I found my grandfather’s uncle listed. Given my grandfather’s political leanings, it is clear to me that his side of the family was among the profoundly anti-secession contingent of Pickens County, making it a wonder that he and my grandmother were allowed to marry. Although the men of my grandmother’s family were fighting for someone else’s way of life, they were Cherokee County Confederates to the core. In its own small way, my grandparents’ marriage must have signaled that the wounds of war were beginning to heal.

← Shame, Denial, and Abolition in England
The Versatile Blogger →

11 thoughts on “Pro-Union in a Confederate South”