One of the field trips nearly every Ohio child gets to take during their school years is still my favorite piece of Ohio’s past. It’s Schoenbrunn Village in what is now New Philadelphia. It was the very first settlement in Ohio, settled in 1772 by a group of Moravian missionaries. Moravia is now a part of the Czech Republic. The name Schoenbrunn means ‘beautiful spring’ in German. 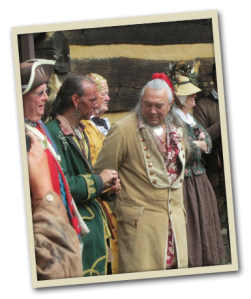 The missionary party, led by David Zeisberger, was comprised of 28 men, women and children along with a herd of cattle. The reason for the relocation of these missionaries from Pennsylvania was due to the unrest between the colonies and the British. The settlement eventually grew to over sixty buildings housing three hundred missionaries and a group of Delaware Indians. The dwellings were made from logs harvested locally, and the settlement was laid out in the form of the letter ‘T’, with the church in the center. The village was recreated starting in 1927 and now has over sixteen log buildings. Poking my head in those old buildings when I was a child is still one of my fondest memories. When I think of a small, dark cabin, I think of Schoenbrunn.

My log cabin in the West Virginia mountains was christened Schoenbrunn in honor of this childhood memory, and even had a name plaque burned into a board. So, when I returned to Ohio, I had to make another field trip to my cherished childhood memory. This village was abandoned in 1777 due to conditions beyond the control of the missionaries, and the church was destroyed, but I think those first inhabitants would approve of what they see today. The school and church, which were the first of these structures erected in Ohio, have been recreated, along with many of the small cabins. God’s Acre is the original Village cemetery, and can still be visited today.

Schoenbrunn Village is open from Memorial Day to Labor Day, from Tuesday through Saturday 9:30AM-5:00PM, and Sunday from noon until 5:00PM. The village is closed on Monday and Independence Day.

← Thoughts on Creativity
What Did Your Hero Do for a Living? →